David Hertzberg’s The Wake World (Tzadik), which had its premiere at Opera Philadelphia in 2017, is released here on the Tzadik label of experimental composer John Zorn. It’s a fitting collaboration, as Hertzberg, like Zorn, takes musical inspiration from the esoteric art of ceremonial “magick.”

The Wake World adapts a 1907 story by British occultist Aleister Crowley, who founded the hermetic philosophy Thelema at the turn of the century. This “tale for babes and sucklings” is an allegorical fable filled with sigils, mystic numbers, and secret meanings intended for an initiated few. While the original text is a somewhat unruly phantasmagoria, there’s operatic potential in its ritualized plotline, which resembles a cross between Bluebeard’s Castle and The Magic Flute. Lola, a sleepy beauty who drifts between dreamland and the titular realm of consciousness, awakens to greet her Fairy Prince lover. Atop a winged horse, they fly to his palace, where he shows her a series of wonderful and terrible visions. As they process through each of its ten houses, Lola is subjected to grisly trials that prepare her to join forever with her Prince. 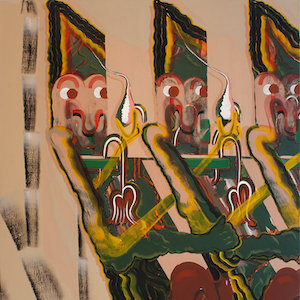 Crowley’s language, with its impossible Book of Revelation imagery, must have left a profound impression on Hertzberg, who emulates the magician’s prose in his equally enigmatic synopsis and stage directions. (Though, it does make it difficult to picture what a production might look like). Musically, he channels another figure of fin-de-siècle (end of the 19th century) mysticism: The Wake World might just as well be the unrealized opera Alexander Scriabin was planning around 1903. Hertzberg pushes his predecessor’s style to decadent extremes — the score exhibits all the narcotic sensuality of an Alphonse Mucha poster. Vivid descriptions of flowers, gemstones, and perfumes are translated into luxurious instrumental equivalents: violin solos that curl and coil like art nouveau foliage; glittering piano flourishes wrapped in opalescent bowed vibraphone; the smoky-sweet incense of muted trumpet. These sonorities, unified by a recurring bell motive lifted from Richard Wagner’s Parsifal, swell and surge in a kind of tantric lovemaking session that is always on the verge of rapturous eruption.

Conductor Elizabeth Braden unleashes some powerful Wagnerian climaxes from the seven-piece chamber ensemble. My one complaint about this recording is that the principals are sometimes swallowed up in the sheer aural excess. Filling out the seven-piece “orchestra” is a sizable choir performing wordless vocalise, à la Scriabin’s Prometheus or Ravel’s Daphnis et Chloé. Their etheric harmonies cast a continuous glow — a soft halo of moonlight that lends the work its sylvan sense of mystery.

Soprano Maeve Höglund relishes every measure of Lola’s curvaceous vocal line. There’s a flirtatiousness to her interpretive choices: the sultry plunges into her succulent lower register or the way she accelerates into phrases, sliding suggestively between pitches. Granted, this sexualized depiction drifts toward some uncomfortable territory, for instance, when Lola is crucified to a board and made to swear her devotion to the Fairy Prince. But the sadomasochistic undertones of male domination are reframed in Hertzberg’s interpretation of the ending.

For the couple’s final reunion, the composer has the Prince appear in female form, a change in pronouns announcing this transfiguration. Samantha Hankey — who has only a few lyric passages in her pants-role guise — suddenly bursts forth with an apotheotic aria set to sapphic verses from a Crowley Kabbalah manual. This homoerotic take on Isolde’s Liebestod is a supremely transcendent moment, Hankey’s crystalline mezzo spurting in jets to ejaculatory top notes before trickling down like the peach juice mentioned in the poem.

Rounding out the cast are a handful of singers in secondary roles, notably the Rhinemaidenesque trio of Maggie Finnegan, Veronica Chapman Smith, and Joanna Nelson Gates, who weave lazy-afternoon lullabies in blues-tinged close harmony. George Sommerville and John David Miles play a grotesque buffo duo, spitting and sobbing through their dialogue with just the right amount of clownish exaggeration.

Named “Best New Opera” by the Music Critics Association of North America, The Wake World is something of a breakout piece for Hertzberg. Since then, the awards and commissions have poured in, including an opera in the works with L.A.’s indie-opera company The Industry. His success would seem to herald a reembrace of absinthe-soaked artistic values from a century past: the sumptuous, the decadent, the symbolist. I imagine many will dismiss his style as lotus-eating aestheticism lacking in social consciousness. While it hints at themes of transgenderism, The Wake World doesn’t engage fully with the topic in the way that Laura Kaminsky’s As One does. Still, it’s hard to resist this music’s hedonistic allure. And we all could do with some beautiful distraction about now.