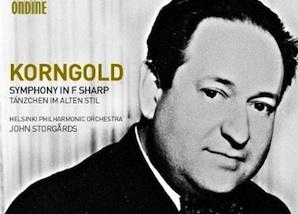 Orchestration Is the Plus in Korngold’s Once-Shunned Symphony

“My yearning, my dreaming, returns to the past.” These words, written by Erich Wolfgang Korngold for a character in his most successful opera, Die Tote Stadt, characterize the essence of his music, as well as the tragedy of how his sole symphony was received. Lauded as a wunderkind in his youth in his native Vienna, he escaped death camps marked for Jews by fleeing to the U.S. in the late 1930s. This act, however, required him to abandon his cultural milieu. Gravitating to where he could best support his family, he ended up trying to fit in as an expatriate in Hollywood, where he had become perhaps the greatest and most influential exponent of the Wagnerian leitmotif technique in film music.

Korngold’s Hollywood successes not only lost him the respect of the “serious music” critics in New York. Having to compose descriptively and episodically for film also denied him opportunities to practice many aspects of formal composition. When his symphony premiered in Vienna in 1954, with its lush melodies and old-fashioned tonalities echoing mainstream composers of the 1920s, and earlier, it didn’t have a prayer. Modernism of Schoenberg and Stockhausen ruled the day.

Only in 1972 did the work receive its first recording, by Rudolf Kempe. That is still considered the best interpretation available, though its sonics have been superseded by more recent recordings. Of these, the present Ondine recording will not disappoint, but its immediate competitors, led by Franz Welser-Möst on EMI and Marc Albrecht on Pentatone, offer more additional music, and, in the case of Albrecht, a more dramatic rendition.

Although Ondine’s filler is short — the Tänzchen im Alten Stil (Dance in Old Style) lasts only seven minutes — it is the first recording of an uncatalogued work of Korngold’s, written around 1919. Unfortunately, half of its music is not new, but an arrangement of a slightly earlier tune used in the composer’s Much Ado About Nothing suite. This version is perhaps not as attractive overall as the one for full orchestra in the suite, though it has a gorgeous part for cello, as you can hear in the excerpt.

The glory of the symphony lies in its orchestration. In the scherzo, I especially admire the shivery chord first heard three seconds in and most fully from timing 0:43 to 0:47, followed later by the stirring horn theme (imitated in many guises by Korngold’s most worthy successor, John Williams) from 1:48 to 2:11.

In short, this symphony is a must for anyone who enjoys 20th-century symphonies in the Romantic tradition. You can’t go wrong with conductor John Storgårds here, who does a fine job with his Helsinki Philharmonic Orchestra crew. Still, you might consider comparison-shopping with the Albrecht, or others, if you want more Korngold than just the nice but puny Tänzchen.