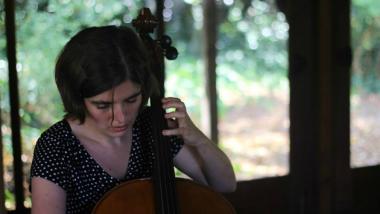 Experimental music involves a certain level of risk: In any experiment, years of testing may pass before desirable results occur. But on Tuesday evening’s sfSoundSalonSeries concert at the Center for New Music, French contemporary cellist Séverine Ballon proved that risk-taking can indeed pay off.

Ballon, who returned to sfSound for the third time, is dedicated to the development of both extended cello techniques and the notation to describe them. She frequently collaborates with composers, and has originated a number of solo works, in addition to giving masterclasses for composers across the United States, Germany, and Israel. Her performances have integrity, but above all, they’re exciting. She shared Tuesday’s program with pianist Andrew C. Smith, who is more active as a composer than performer — and it showed.

Ballon continued to shine in Smith’s In the sense of transparence (2015) for solo cello. The piece uses as its source material George Oppen’s recitation of his 1968 poem Of Being Numerous, and Ballon imitated the rhythms of human speech — in English, no less — so well that the piece’s indebtedness to the voice would have been apparent even without program notes. The piece is repetitive at both the micro- and macro-levels: each of the two sections repeats a fragment of Oppen’s recitation, and the overall structure is a double arch. But Ballon imbued her performance with gratifying movement, executing Smith’s exacting bowing instructions (extreme flautando, quick alternation of sul tasto and sul ponticello) with interest.

Despite the efforts of both performers, other pieces on the program were underwhelming. Elizabeth Adams’s daylight, housing crisis, touch (2014) for solo piano has a promising opening, with rolled Bartókian figures that, under Smith’s treatment, evoked densely-crafted counterpoint. But the piece suffers from too many disjointed ideas, and the hackneyed middle section — which sounds like a singer-songwriter’s laborious working-through of seventh chords — overpowers the rest of the work. In contrast, K.C.M. Walker’s solo piano piece precessional (2012) is unified in its vision — sparse and rhythmic pointillism — but made for a long 12 minutes even under the sensitive touch of pianist Smith, who was at his best here.

The only piece on the program to feature electronics, David Kant’s thirteen random specific points (2015) for cello was also the most evocative of the concert’s title, resonance, order, and chaos. The piece is highly organized, using algorithmically derived bowing patterns to trigger real-time signal responses in the audio-synthesis program SuperCollider. Kant’s system proved sensitive to Ballon’s smallest movements, and in some moments created intriguing resonances. But the piece sounded less developed than others on the program, and the cello lines might have been as interesting on their own. This experiment has yet to bear fruit.