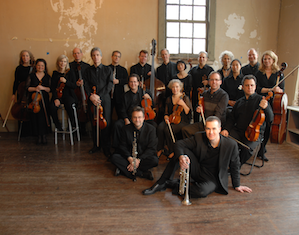 Orpheus: A Constant Whole In One

The Orpheus Chamber Orchestra, the renowned ensemble from New York, brought a period sampler to Bing Concert Hall for its Stanford Live program on Sunday. The periods were Baroque (with music by Bach), classical (Mozart), Romantic (Grieg), and whatever the period is called that we’re in right now (Anna Clyne).

The Orpheus performers manage without a conductor by trading the concertmaster position among the violinists — the other players also rotate within their sections — and by discussing everything among themselves at rehearsals. So, in a sense, the entire orchestra is its own conductor. This must take a lot of time. It’s worth the trouble. The string ensemble, numbering just 15 players at this concert, gave an intensely chamber music feel to Grieg’s Holberg Suite. From Liang-Ping How, the concertmaster for this piece, on through everybody else, each performer felt individual as well as united. In effect, it was an orchestra of soloists.

The Sarabande and Gavotte movements each begin with soft passages for the second violins and violas. These provided some of the finest and purest examples of that intimate chamber sound. When it reasserted itself in the lively concluding Rigaudon, the resemblance to Scandinavian folk music — Grieg’s intention — was much stronger than in most performances. A bustling concatenation enlivened the music.

The players never took the composition for granted. Throughout the work, they played with intense commitment, as if this light popular suite were the masterwork of its time. Perhaps it is. Those inner parts emerged intriguingly, as did the pizzicatos in the lower strings, especially in the opening Praeludium. The Air movement had all the gravity of a great adagio. Its cadences were especially effective, sinking slowly to their harmonic ground level with a touch of ritardando, a particularly difficult trick without a conductor.

Each performer felt individual as well as united. In effect, it was an orchestra of soloists.

The literal translation of the actual title of Grieg’s work is From Holberg’s Time, and since Ludvig Holberg, the Norwegian writer to whom the title refers, was an almost exact contemporary of Bach’s, the suite is, in a way, a pioneering work of neo-Baroque music. Accordingly, it’s a little cheeky to follow it with some genuine Bach — though that’s better than the reverse ordering, which would make too obvious the added sugar content of the neo-Baroque variety.

The soloist for Bach’s Violin Concerto in A Minor was Jennifer Koh. Her playing was utterly smooth and even, with more vibrato than some Baroque violinists use, though she entirely avoided warbling. She found the real emotional core of Bach, and so did the orchestra. As with the Grieg, there was nothing routine or run-through about this performance. In the opening allegro, in particular, Koh was like a solo vocalist and the orchestra was the chorus that joined in joyously.

Anna Clyne was up next. She is a young composer of tough and sinewy music. Of the content and features of her composition Rest These Hands, the concert program said nothing, merely that it is newly composed on an Orpheus commission and was receiving its first performance. It turned out to be a violin concerto, with string orchestra, running about 18 minutes, in two movements. (Press releases I subsequently found said it’s in three movements. I must presume that what I heard as the first movement is actually two run together.) Koh was again the soloist. The music is strange and ghostly, quietly intense. I liked it.

The first movement begins with the soloist playing open drone double-stops, mostly without vibrato, for a long time with minimal bass accompaniment. Koh’s part gradually shifts to a more conventional string-spanning violin solo, and near the end the rest of the instruments finally enter, separately, though the temperature remains extremely cool.

This was effective, in a breath-holding way. The second movement, slightly shorter, was more effective still. An opening section of rising, sliding drones for the soloist shifted into a central lyrical falling melody with richly harmonized accompaniment. The movement closed with the original drone falling back down again, with a tiny sliding upturn at the end. The overall structure of the movement had the same emotional effect as the opening movement of Henryk Górecki’s Symphony No. 3, with Clyne’s central lyrical melody standing in the place of Górecki’s soprano solo. The sense of the opening section building up an expectation and the central part breaking through to new realms was what the two works have in common.

The concert concluded with Mozart’s Symphony No. 34, K. 338. It’s in C Major, a key that for Mozart or Haydn meant “bring out the trumpets and alert the drums.” These players appeared, as did the winds and horns, which had likewise been unheard until then. The opening tutti chord was by far the loudest noise made in the hall all day. It made the audience jump.

Koh’s playing was utterly smooth and even. … She found the real emotional core of Bach, and so did the orchestra.

That symphony received a good, solid performance — big and stately in its opening movement, graciously curvaceous and emotionally expressive in the Andante. The finale was played insanely fast with unrestrained reserves of energy. And, of course, perfectly coordinated. Remember, there’s no conductor standing before the orchestra. It only makes the listener wonder, how do they do it?