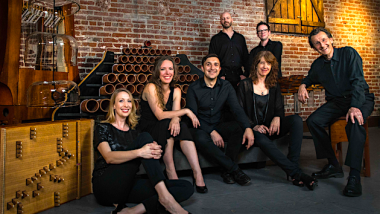 Partch Does Partch at MicroFest

When a concert’s over and the applause fades away, traditionally (and especially in L.A.) the drill is to find your car, hit the freeway, and navigate your way home ASAP. Friday night was different.

As the last microtonal vibration of Harry Partch’s Barstow: Eight Hitchhiker Inscriptions and the ovation that followed it faded, the vast majority of the audience did not head for the parking lot. Tentatively at first, then in mass, they came onto the stage of the Roy and Edna Disney Cal Arts Theater (REDCAT) to marvel at the beautiful instruments that had produced the concert. And the musicians of Partch, an instrumental group dedicated to the composer’s music, were happy to oblige.

Keyboard player Vicki Ray introduced a group of curious onlookers to the chromelodeon, an organ the composer adapted to play an octave range of 84 microtones.  There was the boo, a tower of fiberglass tubes struck with mallets next to its big brother the bass marimba. There were the cloud-chamber bowls — an inverted pyramid of variously sliced-off water bottles; the zither-like kithara and its big brother, the surrogate kithara; and the latest addition, the elegant gourd tree with its cluster of 12 Chinese singing bowls attached to a gracefully curved eucalyptus branch. Some of the instruments were Partch’s originals. The others had been lovingly recreated in an attempt to preserve this endangered species.

Now in its 21st season, MicroFest is a multiconcert event devoted to composers that celebrate “the notes between the notes,” from medieval modality to contemporary premieres. Friday’s program combined two works by Partch: his 1967 revised version of Barstow, and a newly choreographed multimedia performance of Daphne of the Dunes.  They were preceded by performances of the String Quartet No. 9 and the American premiere of Octet by Ben Johnston who (at the age of 92) was recently inducted into the American Academy of Arts and Letters.

After hearing the performance of Johnston’s gem-like Octet, it seems inconceivable that this sumptuously beautiful piece (composed in 1999 and 2000) has taken so long to receive its American premiere. It is a work that continues the composer’s exploration of microtonality, but in a way that is so gentle and rooted in American folk music that it is irresistible.

Octet unfolds as a wistful theme and variations based on the popular fiddle waltz “Ashokan Farewell,” composed in 1982 by Jay Unger, who played the tune each year at the closing of his Ashokan Fiddle and Dance Camp. But it was television that made the hauntingly beautiful melody an instant classic when Ken Burns incorporated it as the primary theme for The Civil War documentary.

Johnston’s interpretation (for string quartet, flute, bassoon, double bass, and clarinet) begins with the flute (played dulcetly by Sara Andon) and cello (Timothy Loo) playing the unadorned melody in its original form. Then Johnston gracefully recasts the melody in just intonation with microtonal shadows for different instrumental combinations and eventually the full ensemble. If Octet turns out to be Johnston’s own farewell (the composer is said to be in ill health), it will serve as a most poetic goodbye.

In contrast, the energetic performance of Johnston’s Ninth String Quartet (composed in 1998) by the Lyis Quartet (Shalini Vijayan and Alyssa Park violins, Luke Maurer viola, and Timothy Loo, cello) represents the composer at the top of his game. It contains many of the structural elements and contrasts that appear in Octet, but in the form of four, fully developed and contrasting movements.

Harry Partch first composed the music that would become Daphne of the Dunes as a soundtrack for the1957 film, Windsong. He revised the score in 1967 with the notation that it might be suitable as a dance work. Friday’s performance by the nine members of Partch and the dance duo of Liz Casebolt and Joel Smith took the Greek myth and gave it a decidedly contemporary spin a la the #MeToo movement. In their interpretation, Daphne (described by Casebolt as “a minor deity and a minor”) finds herself (and her virginity) threatened by a sex-crazed stalker, Apollo.

As Partch’s instruments created a mythic landscape of rhythmic plucks, slurs, twangs, and clangs, Apollo (in a wolf mask with Cupid’s shaft sunk in his chest) hunted down the hapless Daphne who kept changing wigs to try to escape his pursuit. At the same time images of classic paintings on the theme were projected along with film clips from North by Northwest and Janet Leigh’s shower scene in Psycho. It made an intriguing collision of eras — historically, socially, musically, and cinematically.

Barstow: Eight Hitchhiker Inscriptions, performed in its 1968 version, is one of Partch’s best-known pieces. Based on the composer’s hobo days hitching and riding the rails during the Depression, the text is drawn from graffiti entries left by eight fellow thumb-travelers. The effect falls somewhere between Woody Guthrie’s Bound for Glory and Jack Kerouac’s On the Road.

Throughout the performance the mood was playful with a hint of anxiety as the hitchers (members of the ensemble led by John Schneider) recounted their experiences in pre-Twitter fashion. Their varying messages were accompanied by the pulsing rhythms of the marimbas, the tubes, cloud bells, and strings, the mallet instruments standing in for emotional highs, the slurring, grumpy strings for the lows.

Because Harry Partch’s music can only be performed as intended on these specific instruments, it’s a rare and fascinating experience to see and hear it played. The members of Partch (Schneider, Ray, Erin Barnes, Alison Bjrkedal, Dustin Donahue, Nick Terry, T.J. Toy, and Alex Wand) are doing everything they can to make sure Partch’s music and his instruments stay alive. They also are encouraging other composers to explore the microtonal opportunities these unique instruments offer.

Steven Schick Builds a Theater of Sound with his Fabulous Machine

In the guise of a wildly imaginative inventor, Schick works magic with his musical contraptions.

A Relentless Spirit of Inquiry and Innovation Sparks Thingamajigs

The new-music festival celebrates 20 years with their usual range of unusual music and fresh ideas.