Directors can take all sorts of liberties when it comes to Baroque operas and other dramatic vocal works of the period. The distant thorniness of the texts — whether eye-crossingly complex, static, or some daunting hybrid of the two — invites free-wheeling invention. Freedom becomes its own kind of fidelity to the true spirit and expansive character of a piece.

And so it is with Christopher Alden’s intense, gender-fluid, media-heightened staging of Handel’s Aci, Galatea e Polifemo at ODC Theater (through February 1). By setting this three-character serenata in a stark, claustrophobic environment that tucks a claw-foot bathtub inside a pair of angled video screens, with a crystal chandelier hanging like some luxurious taunt nearby, the director lasers in on the musical and theatrical essentials of the 75-minute piece. Philharmonia Baroque Orchestra & Chorale (PBO) mounted the production, in partnership with Anthony Roth Costanzo (a member of the cast), Cath Brittan, and Brooklyn’s National Sawdust, where this Aci debuted in 2017.

First, and by design, comes a reordering of conventional expectations. Clad in matching green jumpsuits, bright yellow scrubbing gloves, and hygienic hairnets, soprano Lauren Snouffer (as the male shepherd Aci) and countertenor Costanzo (his beloved sea nymph Galatea) enter first. Historically the gender-reversed casting isn’t unorthodox at all. Musicologists believe that Handel may well have conceived the male role for a female singer, while Galatea was meant for a mezzo/castrato.

Here, with no attempt to mask gender, a kind of immersive sexual energy takes hold. When Aci removes his/her hairnet, Snouffer’s long hair comes spilling out. At other moments, bodies are treated as objects to be pawed and toyed with and shamelessly tortured.

What matters straight off is how arrestingly the terms are set, musically and psychologically, as the story’s tragic arc is set in motion. In both their janitorial garb and wide-eyed but somehow stuporous demeanor, the two lovers seem enslaved — to their stultifying work (they sing their opening arias while mechanically mopping the floor), to each other, and to some foreboding fate. Their destiny arrives in the person of Polifemo, a giant with “venom in his veins” (the aptly imposing bass-baritone Davóne Tines).

What transpires, in a story adapted from Ovid’s Metamorphoses, is both inevitable and grimly unsettling. In love with Galatea, Polifemo dispatches his rival, Aci, only to lose his beloved in the process. An oft-brandished straight razor, a prop that gets more stage time than it has since Sondheim’s Sweeney Todd, figures repeatedly in the violence. And in case anyone missed it, the sometimes hyperactive video screen gets streaked and splattered with virtual blood.

If Alden and his cast occasionally seem at a loss for what to do with themselves in the spaces between the spasmodic action — each one of them spend some time in the oceanically suggestive bathtub — the music has a muscular momentum.

Answering each other’s sinuous and sumptuously decorated vocal lines, Snouffer and Costanzo sang with unsparing vitality and expressiveness on opening night. A visceral rawness crept in at times, especially from Costanzo, fresh from the title role in Philip Glass’s Akhnaten at the Metropolitan Opera, a performance that came across powerfully in the HD broadcast.

Snouffer drew the single strongest card of the evening and played it splendidly in her lavishly trilling bird aria. The Philharmonia Baroque Orchestra’s shimmering accompaniment and the delicate, stuttering flight of a bird across the video screen supplied an elevating lift. (Mark Grey created the prominent projections and more supple sound design.)

Tines had the most challenging aria of the night, a kind of superhuman test of range that forced his voice into depths so low the sound was like a creaking cellar door. It was both strange and fitting to see this giant brought, literally and figuratively, so low.

Conducting from the harpsichord keyboard, Nicholas McGegan led a performance that matched the emotional fiber and immediacy of the singers. Tempos ran from near frantic sprints to stretched ritardandos and even full stops. If that meant an occasional infelicity from the band, they seemed in keeping with a drama that is anything but politely pretty. Electronics played a role as well, from recorded whale songs that issued from the deep to musical “singovers” of the lovers who are beyond the pale onstage. It was as if their immortal souls and unkillable passion were issuing forth from the speakers.

Not to be confused with the composer’s later Acis and Galatea, this brief work made its impact on the strength of a production and performances that held nothing back. Here was a love triangle pried open, with the wreckage exposed for all to see and hear up close. 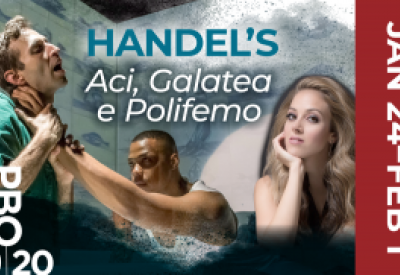 A rousing performance of Handel’s masterwork: Shouldn’t this Hanukkah-themed oratorio be a regular item on the December holiday menu?