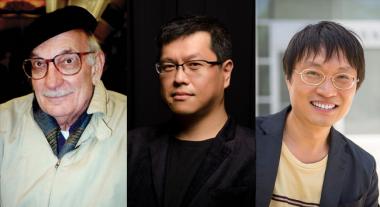 At the beginning of Edgard Varèse’s percussion work Ionisation (1931), following a brief introduction, one of the 13 players pulls down on the cord of an instrument known as a lion’s roar, producing a sound much like its namesake. Calling to mind MGM’s Leo the Lion, it launches the piece into a cinematic soundscape of sirens, maracas, gongs, and snare that conjures up New York City in the Roaring Twenties.

Ionisation, the first important work for percussion ensemble and an inspiration for nearly a century of composers, served as the centerpiece to the San Francisco Contemporary Music Players' final Project TenFourteen concert of the season last Sunday at Berkeley’s Hertz Hall.

Artistic director Stephen Schick led not one but two inspired performances of Ionisation.

It was clear he and his ensemble love the piece — a few of the 13 percussionists could even be seen enthusiastically bobbing their heads to some of the more Latin- and jazz-tinged rhythms in the score. Schick conducted with surgeon’s knife precision, clearly delineating the work’s formal divisions.

Between the two performances he told the audience that he thought the work was about “musical cohabitation.” Percussion instruments from various cultures — Asian temple blocks, the Latin-American güiro, the Spanish castanets — are thrown together. The percussionists, who initially play disparate musical material, must listen to one another and learn to adopt each other’s playing style, eventually leading to a “soup of noise,” as Schick called it. Yet under Schick’s baton, this “soup of noise” was not a painful cacophony, but a thrilling climax to the work.

Preceding Ionisation was the world premiere of a percussion ensemble work, Xylophony, by George Crumb, at 85 years old a celebrated figure in postwar American music. Instead of Varèse’s big city, Crumb depicts ancient rainforests through the use of over 100 instruments played by an ensemble of five. In his program note, Crumb called it an “ecological” composition in the vein of his Vox Balaenae (1971) and An Idyll for the Misbegotten (1985).

The first movement, “Song of the Forest Primeval,” began with low primordial gongs and whispers of incantations or the names of forgotten Gods from the percussionists. Scrapings and scratchings on gongs were joined by sturdy marimba chords, a woody evocation of ancient trees. Cells of activity, each louder and more active than the previous, swelled and died away. This led to a climax of cymbal, gong, and bass drum crashes and a quiet coda with more whispers.

The Tibetan cymbals of this last movement appeared again in the world premiere of Japanese composer Koji Nakano’s Time Song V: Mandala for percussion and chamber ensemble. The piece called upon images from Tibetan Buddhism, mixing traditional Tibetan musical timbres with experimentalist approaches. For instance, a muted trombone, played by Hall Goff, imitated the nine-foot long dung chen horn, while the woodwinds utilized extended techniques such as rapidly pushing down on keys without blowing.

The ritualistic “Incantation” section of the piece introduced an ostinato in the bass drum and jingle bells while soloists played improvisatory-like passages — a kind of Tibetan jazz. In the finale of the piece, Nakano created a musical mandala, only to “brush it away” in a short coda that consisted of wire-brushed bass drum and vocalized syllables from the players. The coda successfully conveyed the image of Tibetan monks sweeping aside the intricate rings of a sand mandala.

The concert ended with a third world premiere by Chinese-born composer Lei Liang, his 2014 concerto for double bass and small ensemble, titled Luminous. The piece was composed for Liang’s UC San Diego colleague Mark Dresser, who served as the soloist at Sunday night’s performance. While Liang maintains some aspects of concerto form, including ritornello-like passages played by the ensemble alone, the solo part was far from conventional.

Rather than traditional virtuosity, Dresser displayed a range of extended techniques: lengthy moans and shrieks on single pitches, glissandos, pizzicati up and down the instrument, calling to mind a Chinese zheng, and, for the grand finale, bowing on the “other” side of the strings to construct otherwise impossible chords. Dresser admirably executed each of these extended techniques, bringing out the “rich spectra” of sounds that Liang appreciates in the double bass.