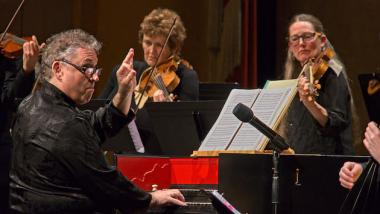 “Corelli the Godfather” was the title of the Philharmonia Baroque Orchestra’s March program, which I heard on Friday, March 9, at Stanford’s Bing Concert Hall. Preconcert lecturer John Prescott warned the audience not to expect from that title anything like Nino Rota’s lush movie music.

Arcangelo Corelli was a Baroque composer who flourished in Rome around the year 1700. What guest conductor Richard Egarr meant by the title was a concert featuring music by Corelli and his two greatest disciples in the fine art of concerto grosso, both cosmopolitan composers of German origin, Georg Muffat and George Frideric Handel.

The term “concerto grosso” can mean a variety of things, and some masters of the form, like Vivaldi and Bach, took it in assorted directions. A Corelli-style concerto grosso, though, has a specific form, more grosso than concerto, in the words of Corelli’s biographer Peter Allsop. As realized by Philharmonia Baroque, such a work calls for a 20-player orchestra of strings and sundry, mostly all playing together. For variety’s sake, occasionally the bulk of the ensemble, called the ripieno, will drop out for brief passages featuring a smaller group called the concertino. This consisted here of lead violinists Elizabeth Blumenstock and Jolianne von Einem, and cellist Phoebe Carrai, with additional continuo support on theorbo (bass lute) by David Tayler and occasionally from Egarr, leading the ensemble from the harpsichord. (The remaining nonstring instrument, a portative organ, was part of the ripieno.)

Corelli’s definitive collection, published as his Opus 6, contains, in the words of Grove’s Dictionary, the “archetypal concerti grossi.” We heard its No. 10 in C, a dance suite in the manner of Bach, and the more typically Corellian No. 2 in F, a church concerto built of flickering alternations between fast and slow music. Corelli’s music is distinguished by a penchant for tangy melancholy, even in the major mode.

Muffat’s Sonata No. 5 in G, a concerto grosso despite the title, is strikingly similar to Corelli in style and feel, with more of a driving bass continuo line, and some creative alternations between ripieno and concertino, especially in the enormous concluding passacaglia. Philharmonia Baroque gave sweep and power to all this music.

Handel, writing his own Opus 6 in his maturity nearly 30 years after Corelli’s death, produced more formally hearty music with even more emphasis on the full orchestra than Corelli or Muffat. Handel’s concertino passages, though less frequent, tend to be slightly longer and more elaborate than those of his colleagues, with tumbling canons especially in No. 1 in G, and a notably biting and vicious finale in the darker No. 4 in A Minor.

One concerto non-grosso was played at this concert, Handel’s Organ Concerto No. 15 in D Minor. Egarr moved to the organ to play the solo part. The score consists of two movements, with longer passages for the soloist, albeit they’re still much briefer than would be customary in 19th-century concertos. The organ plays continuo during the ripieno passages, as was customary at the time. Between the movements is a space marked for the organist to improvise unaccompanied, a skill Handel cultivated in himself. Egarr, who assured the audience he had no idea beforehand what he would do, built up dissonant chords in various registers with various stops, and played brief repeating passages based on Handelian motifs. He also made time to say “bless you” when somebody sneezed.

Throughout the concert, the orchestra played with liveliness and vigor. Intensity in the variation of dynamics enlivened the music, notably in the sudden forte that closes a movement in Handel’s Op. 6 No. 4 that the composer otherwise wanted so quiet he put the word “piano” in the tempo marking. Added ornamentations, particularly from Blumenstock in the closing cadences of movements — common Baroque practice — were tasteful and well-integrated.

Stellar programming and superb playing marks a program of Classical works by tried-and-true composers plus one virtual unknown.