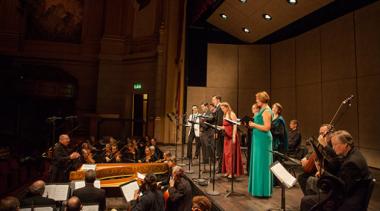 The infant Archduke Leopold, born in 1716 as the heir apparent to Austria’s Hapsburg dynasty and dead within the year, is more or less lost to history and forgotten. Until this month in the Bay Area, so was the extravagant serenata composed by Alessandro Scarlatti to celebrate his birth.  Framed as a politely silly quarrel among the four vocally personified seasons, each one claiming credit for Leopold’s fortuitous birth and shining prospects, La Gloria di Primavera received its long-delayed revival in four performances October 4-10 by Philharmonia Baroque.

The title is a spoiler. Spring, sung by the fine, dusky-voiced mezzo soprano Diana Moore, holds bragging rights in the end, when an amusingly self-important Jove (baritone Douglas Williams) deems her triumphant over her seasonal rivals.

With neither the stakes nor results ever an issue, the talent contest is a patently artificial occasion for various alluring arias and ensembles, great swatches of orchestral nature painting, and enough coloratura to satisfy even the most trill-happy glutton.  If Scarlatti’s Gloria offered nothing more than Autumn’s entrancingly sustained paean to a brook’s “silvery foot” freed from the ice (a mellow but muscular-toned countertenor Clint van der Linde) or Spring’s delicately luscious nightingale aria (Moore in a sweet exchange with flutist Stephen Schultz), it would have more than justified music director and conductor Nicholas McGegan’s act of musical resuscitation.

But there was much more than those two treats to savor.  Every season had his or her moments, laid out with some fine and distinctively characterized singing. In both simple and florid lines of recitative, the varied arias, duets both quick-fingered and languorous, and several stirring, multi-voiced choral numbers (enhanced by five member of the Philharmonia Chorale), the principals gave full value to the score. The orchestra, despite some stodgy work here and there, made the Danube River ripple in beguiling legatos, caught the shiny flow of that silver-footed brook, and rallied with declarative trumpets and piping reeds for the more military flourishes.

Scarlatti (the father of keyboard specialist Domenico Scarlatti) left no one underemployed – to a fault.  At two hours and 40 minutes, this Gloria was overstuffed, especially in a prolonged series of repetitive numbers that followed Spring’s victory. There was a fair amount of Baroque wheel-spinning, with ornamentation for its own sake, along the way.

That said, the pleasures kept coming. Tenor Nicholas Phan, who was all crisp, decisive phrasing as a Type-A Winter, defrosted late in the going, with a touching plea for young Leopold’s safety in war and peace. Suzana Ograjenšek, who gave a lucid, sunny, and slightly feisty performance as Summer, softened as well, reaching out to clutch the hand of Spring in a tender, annealing gesture.

That was a small but telling theatrical enhancement in an evening that might have used a few more of them. The original production, according to Bruce LaMott’s informative program essay, featured elaborate sets and costumes and a scenic coup for Jove’s Part 2 entrance. Williams made the most of his walk-on entrance here, earning some laughs for his show of godly pomposity. But other opportunities for interplay with the contending seasons were not seized. Williams’ rather monochrome singing didn’t enliven matters,

Friday evening’s performance reacquainted a San Francisco audience with the recently re-opened and slightly altered Herbst Theatre. The new, clean-lined acoustical shell looked and sounded good. The vocalists projected with warmth and clarity into a house where side boxes have been faced in wood with some angled panels to improve the acoustics. The orchestra was positioned in the de facto pit in front of the stage.  In future concerts, with the musicians onstage under the shell, Philharmonia Baroque and other ensembles will be able to test drive the orchestral sound of this lovely, treasured theater.