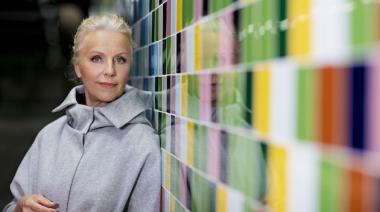 It was musical business as usual in the all-Handel first half of the Philharmonia Baroque Orchestra’s March 7–10 concerts — not that there was anything routine about the Overture to Partenope and the five vocal selections that followed. With the regally entrancing mezzo-soprano Anne Sofie von Otter and the ingratiating countertenor Daniel Moody in the house, and conductor Nicholas McGegan marshaling his fine period-instrument band, the audience at the Herbst Theatre cozied up to the kind of programming and performances they’ve come to expect.

PBO listeners have also learned to expect the unexpected now and then. And so it was after intermission, with both a world and Bay premiere on the bill (both songs by Caroline Shaw), along with a trio of works by the contemporary Estonian master Arvo Pärt. Finally it was back to the 17th century, with an evening-ending performance of music from Purcell’s The Fairy Queen.

While there were abundant pleasures to be found throughout the evening, attention should go first to what was new and/or perhaps new to Philharmonia Baroque regulars. It was entirely fitting that von Otter should sing Shaw’s two pellucid settings of contrasting poetic texts. In 2015, the singer proposed that PBO commission Shaw to write her a song to perform with the orchestra.

That piece, Red, Red Rose, is a beauty. Von Otter and the orchestra gave it an exquisite Bay Area first airing.

In musicalizing the Scottish bard Robert Burns’s famously fervent lines (“Oh, my Love’s like a red, red rose”) Shaw used a transparent tonal language of spare, expressive simplicity. There were echoes of a Baroque ground bass and effusions of Coplandesque lyricism. The strings offered up a limpid pizzicato backdrop to start. Shaw worked a witty, floating dissonance into a line about a melody “sweetly played in tune.” Tints of traditional Scottish ballads came through.

Von Otter, who had changed into a prettily patterned floral dress at intermission, looked and sounded in accord with Shaw’s compositional palette. In The Edge, a world premiere setting of a quietly ravishing 2016 Jacob Polley poem, the singer’s lustrous, richly characterized voice and delicate discriminations lent a luminous glow. Once again Shaw tracked the lines attentively, whether with pointilist pizzicati, pulsing strings, rustling agitation, or an open-hearted tonic chord. The closing lines — “the light that sings/off the edge of the rose” — got a wondrous quizzical uptick. Von Otter spun it all together with the conviction of someone who knew the song and its suggestive depths of feeling through and through.

The Pärt portion of the evening began with the orchestral Summa, an ideal invitation to this soulful artist’s universe of meditative calm. The gradual ebb and flow of a single oscillating string figure took on the gravitational pull of an ocean tide in McGegan’s sensitive, demurely lush reading. Moody, singing with the purity of a boy soprano, gave the Lord’s Prayer (Vater unser) a self-effacing clarity. Finally, set off only by the shimmer of two violins, Von Otter and Moody sang an aching, heartsick duet (Es sang vor langen Jahren) from opposite sides of the stage. Seated far apart, they twinned their lines together prettily, even as the distance between them seemed unbridgeable.

The two singers teamed up to comparably fine effect in Handel’s “Welcome as the dawn of day,” from his oratorio Solomon. Here love bloomed openly between the title character and von Otter’s Queen of Sheba. They sang and played it to the hilt, trading phrases and adoring looks. Von Otter had already made her Solomon Sheba shine, with sparkling diction and a plush, pliable conversation with oboist Marc Schachman in “Will the sun forget to streak.”

Moody did his best solo Handel work in a dark, dusky, and assertive “Furibondo spira il vento” (Furious blows the wind) from Partenope. A listener could almost feel the harsh winds storming through the lines.

McGegan opened the evening with a keen and eventful account of that opera’s overture. Phrases were balanced and poised and rhythms tightly sprung. The music had both sensual allure and a purposeful stride, whetting the appetite for the opera in full. Happily, San Francisco Opera can fulfill that wish, when the company reprises a fine and modish revival of their 2014 Partenope in June.

The musicians fared less well in the Handel Concerto Grosso Op. 3, No. 2. A prevailing sluggishness and scruffy playing, including fluffed notes, marred the sequence of dances. The Purcell Fairy Queen Suite got off to a similarly unpromising start, only to rally partway through. Dramatic shifts, rustic tunes, and a whirling Chaconne brought this richly varied evening to a close.

Anne Sofie von Otter: Discovery and the Love of Singing

New songs, classic songs, collaborations — Anne Sofie von Otter craves doing it all, and does so with class.