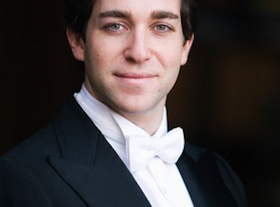 Despite its name, Philharmonia Baroque Orchestra (PBO) is no stranger to Classical and Romantic repertoire. Yet Saturday evening’s program at First Congregational Church in Berkeley was indeed the “exciting first foray” promised in the program notes. This time the distance from PBO’s core repertory was geographic, not temporal. The ensemble offered a potpourri of little-known Russian orchestral music and arias, of surpassing variety, executed to the high standard which has made PBO one of the world’s premier early music orchestras.

As guest conductor Steven Fox put it, in some informative remarks during the first half of the concert, Russian music before Mikhail Glinka (1804-1857) is something of a black hole to today’s classical musicians and audiences. The repertoire is hardly lacking in quality, but it often trades in stylistic and textural features more familiar to audiences from Western European examples.

This is not surprising, since the composers on the program studied in Western Europe. But as the 19th century wore on, the increasing importance attached to notions of musical Russianness left earlier, stylistically cosmopolitan composers out in the cold. Only recently have musicians — Russian and foreign alike — actively reclaimed Russian music from the decades around 1800.

The evening’s selections showed a wide array of styles and affects. The players crafted a tight, ensemble sound and effective contrasts of color in Maxim Berezovsky’s Symphony in C Major. A suite from Dmitri Bortniansky’s Alcide, an Italian opera seria, allowed the brass musicians a solo spot. Kathryn Adduci and Fred Holmgren, on natural trumpet, fashioned a potent, clear tone in the Overture. The entire ensemble played the “Danza degli spiriti” (Dance of the spirits) with the extraordinary refined articulation you relish when listening to an orchestra of such high caliber. Soprano Anna Dennis, in her Bay Area debut, taunted the audience with a few flashes of coloratura but showed impressive balance throughout her range and a perfectly judicious use of vibrato, which enriched, but never obscured, her elegant sound.

If the evening had one star, however, it was cellist Tanya Tomkins, who played the Concerto in D Minor by Johann Heinrich Facius. She deftly handled the technical fireworks of the outer movements, seeming to push her instrument near its limit. She stressed the top string most: Facius regularly forced Tomkins into a soprano register. But she displayed her artistry most prominently during a flawless rendition of the Romance, the concerto’s second movement, squeezing every drop of expression out of its juicy lines.

Fox led a frenetic, balletic movement by Evstigney Fomin to open the second half. His conducting was consistently charming as he danced along, even at the less rhythmic moments. Another Bortniansky suite, from his French comic opera Le fils rival (The rival sons), featured a lovely entr’acte with winds and fortepiano alone.

Instead of being fons et origo of Russian music, Glinka appropriately played capstone to last night’s offerings — albeit mostly in arrangements by Rimsky-Korsakov. In an aria from Glinka’s opera Ruslan and Lyudmilla, soprano Anna Dennis and violinist Carla Moore engaged in a beautiful thematic dialogue. Moore’s exquisite high notes and Dennis’ meaty expressivity wove together to capture the character’s utter despair.

Finally, Fox and his players channeled Polish dance music in the Introduction and Polish Chorus from Glinka’s Ivan Susanin. Their rollicking closed what was a diverse, well-paced program of music that deserves more performances than it currently receives. Hopefully PBO’s efforts will encourage musicians and music lovers to discover more of it.