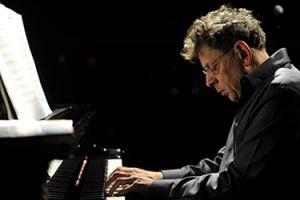 Gertrude Stein once remarked, “There is no such thing as repetition. Only insistence.” When Philip Glass plays his own music, as he did on opening night of the inaugural season of the Philip Glass Days and Nights Festival, this insight rings true. For decades now, Glass has been repeating the same chord progression with the same style of melodic patterns. Yet, to audiences hearing the composer play his own music — live and direct from the source — the repetitive aspect is almost forgotten. Glass plays with a natural calm and free ease that makes the piano glow. The phrases breathe, grow, and die down, with lots of rubato and a large, full sound.

His performance of two movements from Metamorphosis sounded almost like an improvisation, as if it had been composed anew for this occasion. The music was so beautiful that it yearned to be repeated.

Glass plays with a natural calm and free ease that makes the piano glow.And repeat it he will. Glass has launched his new festival in Hidden Valley, a retreat center tucked into beautiful Carmel Valley, right where the nippy Monterey fog meets the warm inland air at the border between the sun and those clouds that park along California’s northern coast for most of the summer. Hidden Valley hosts workshops for musicians, dancers, and scholars. It even houses members of the Monterey Symphony, who often drive from as far away as San Francisco or Los Angeles for sets. Glass, a New Yorker, described the place as a “paradise” before sitting at the piano.

This location is only temporary, though, as the festival headquarters plans to move into its own building in Big Sur. The vision is for a permanent location for Glass’ work after he leaves the scene. Both locations represent pilgrimage sites accessible from nearby urban centers only after long drives along sandswept lettuce plantations, wineries, and the dramatic rocky coastline.

Opening the festival were works not by Glass but rather by Schubert and Shostakovich. A program note explained the connection: Schubert’s relationship with major and minor keys goes much deeper than “happy” vs. “sad” keys; likewise with the music of Glass, which is predominantly minor and introverted and suddenly blooms wide open in the major harmonies. Schubert and Glass also share a birthday (January 31), though 140 years apart. With Shostakovich, the connection is clearer: Both composers take ostinato (repeating a small motive) to new levels. In his Quartet No. 8, for example, Shostakovich bases the entire composition on the four notes that musically spell his name (or rather its initials, in German transliteration) — a melodic figure that is repeated hundreds of times over the course of five movements. With each reiteration the composer insists on the individuality of his personality within the context of a totalitarian society.

In the context of this festival, everything that’s repeated can point to a connection or a precursor to the music of Philip Glass.The Shostakovich was performed by the newly reconstituted Philip Glass Ensemble, a collection of superb musicians. Playing first violin in the Shostakovich was Tim Fain, performing with no holds barred, hitting the open E-string without remorse, and channeling the quartet’s dark agony. Cellist Matt Haimovitz established a serious base of sound and carried out the upper register solos with amazing conviction. Violist David Harding also stepped up with an honest, reedy viola sound in the part's fiery solos. One critical ingredient of a great string quartet is a second violinist who is not afraid to challenge the first violin. Maria Bachmann did just that, and then some, daring the men of the ensemble to push Shostakovich’s music over the edge.

The ensemble played remarkably well in tune, and (in the fine acoustics of Hidden Valley’s barn-converted-to-a-concert-hall) achieved that combination of unified sound and individuality of parts that is the essence of good quartet playing.

Bachmann returned to the stage with pianist Jon Klibonoff after intermission for Glass’ wondrous violin sonata. A recent piece (2008), it uses classic Glassian harmonies but also includes all sorts of complex layers and shifting patterns and finishes with a wonderful little coda. This whimsical mini-tag at the end was a clever way to end the piece: How else do you stop a piece that churns forward as if springing from an endless well? Bachmann played the piece with free-flowing bow and shimmering-fast fingerwork, giving a thrilling performance.

Klibonoff, on his own, led off the program, playing a pair of Schubert impromptus with a plaintive, easy simplicity that, while effective, seemed a little too demure. Schubert, like Glass, loved to repeat large swathes of music and revel in their “heavenly lengths.” In the context of this festival, everything that’s repeated can point to a connection or a precursor to the music of Philip Glass. Repetition is an integral part of music, so much so that it calls into question Gertrude Stein’s quip: Is there really “no such thing as repetition”? Or is there, rather, nothing but repetition?