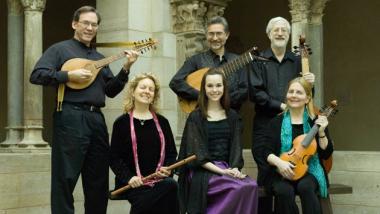 Playful Period Pieces from Shakespeare’s Time with the Baltimore Consort

There’s a popular genre of Shakespeare-themed concerts in which an orchestra or college opera program performs excerpts from the most popular Shakespearean musical works — Gounod, Berlioz, or Tchaikovsky’s Romeo and Juliet, and a whole lot of Verdi.

In its concert on Friday, Nov. 20, at Palo Alto’s First Presbyterian church, the Baltimore Consort provided a welcome alternative to this model with a program of “songs, dances, and fancies” from Elizabethan England, many of which Shakespeare would have actually heard in his lifetime and may have even incorporated into his plays.

The 28 numbers on the program were divided into eight sets or suites, each organized around one or two of Shakespeare’s works. A few of these were settings of song texts from the plays, but most were songs simply mentioned by Shakespearean characters or otherwise tangentially related to the plot. In their program note, the ensemble pointed out that the makeup of their own Consort almost exactly matched the Elizabethan instrumental consorts that accompanied Shakespearean theater and court entertainments.

Joining the group was soprano Danielle Svonavec. A cantor at Notre Dame University’s Basilica of the Sacred Heart, Svonavec has a sweet and youthful voice that was ideal for the pastoral tunes and texts on the program. While she had a tendency to drift sharp in her upper range, this may have had something to do with the venue’s awful acoustics.
It was quite fascinating to hear some of Shakespeare’s iconic texts in what was likely their original versions. As Shakespeare’s composer-in-residence, Robert Johnson set Ariel’s “Full Fathom Five” from The Tempest. Unfortunately, his setting is underwhelming — it does little to convey the mysterious “sea-change” undergone by the (supposedly) drowned King of Naples. Svonavec sang accompanied only by lutenist Ronn McFarlane, as if she were Desdemona accompanying herself in her last moments.

The anonymous “Willow Song” from Othello, on the other hand, lived up to the tense, ominous bedroom scene preceding Desdemona’s death. Svonavec sang accompanied only by lutenist Ronn McFarlane, as if she were Desdemona accompanying herself in her last moments. Her interpretation of the mournful descending “Willow, Willow” refrain — an elegant alternative to Verdi’s “Salce, Salce” — sounded especially foreboding since Svonavec also sang a line missing from the original Shakespeare: “Write this on my tomb, that in love I was true.”

Svonavec has a penchant for the theatrical. For the Hamlet set, she donned a pair of overalls and carried a shovel down the aisle, depicting the gravedigger who unearths Yorick’s skull. Artificially deepening her voice, she sang the character’s “In Youth When I Did Love” in a “low” accent typical of Shakespeare’s clowns.

For the concert’s A Midsummer Night’s Dream finale, Svonavec changed into Peter Pan-like green tights to play the part of Puck in her rendition of “The Mad Merry Pranks of Robin Goodfellow,” an anonymous, 17th-century song. Svonavec indulged in her own pranking on the instrumentalists — knocking things over, taking a selfie with bass violist Larry Lipkis, and wrapping McFarlane’s scarf around his head like a babushka.

In addition to being a good sport, McFarlane, a 2009 Grammy nominee, is an expert player. His solo performance of John Dowland’s “Fancy” was one of the evening’s highlights. For Jean d’Estrée’s lively 1559 “Les Buffons,” McFarlane performed the opening lick with Rock-style strumming — a deliciously out-of-place musical gesture that nevertheless matched the spirit of the piece.

Flutist Mindy Rosenfeld, one of the Baltimore Consort’s founding members, was another standout. For “The Carman’s Whistle” — a bawdy broadside ballad mentioned by Falstaff in Henry IV, Part II — Rosenfeld took on the role of a lusty cart driver who seduces a maiden. When Svonavec, in the role of the maiden, sang of being overwhelmed by the young man’s whistle, Rosenfeld spun off a dizzying series of virtuosic improvisations on her fife in a countermelody with the vocal line. In “Tartleton’s Jig,” part of the Hamlet set, Rosenfeld engaged in some erratic jumpy ornaments that may have been meant to depict Ophelia’s insanity, as a few of the numbers in the set are sung by the character during her mad scene.

In addition to playing flute and fife, Rosenfeld provided some Elizabethan local color with bagpipe and krummhorn solos. For the variations on “Greensleeves,” Lipkis put aside his bass viol and introduced the audience to the gemshorn, a kind of Renaissance ocarina fashioned from a goat horn. Yet the instrument is little more than a curiosity — it has too quiet and breathy a sound to be utilized with any regularity in performance. But the instruments were put to good comic effect in the last “Robin Goodfellow” number, portraying Puck's many transformations.