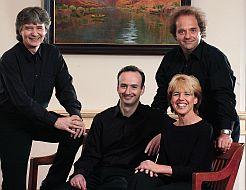 David Bratman on February 15, 2010
Music-lovers in the South Bay had their calendars marked. The Takács Quartet came to San José’s Le Petit Trianon on Saturday, as part of the concert series of the San José Chamber Music Society. It was, I believe, the first time this distinguished ensemble had performed down here in eight years, since before violist Geraldine Walther joined the group.

The Takács Quartet specializes in the core 19th-century German repertoire, and particularly in Beethoven. We got some of that, of course. Atypically, we also heard a new work, the first Northern California performance of the String Quartet No. 3 by contemporary Scottish composer James MacMillan. The Takács commissioned this work; they gave its premiere in London two years ago and have been touring with it since then.

MacMillan is known for music combining experimental modernism with an emotionally direct allure. His quartet never ceased being interesting; it was not arid or meaningless. I could not call it an appealing or friendly work, though. It lacked the coherence and firm direction of other music of his that I’ve heard.

The middle movement had a fair share of growls, in the tradition of Prokofiev or Bartók. Various promising rhythmic patterns would be set up and then immediately dropped. It was also a laboratory for strange sounds, also tried out and then dropped: bows rapping on strings, knuckles rapping on wood, and one sound new to me and also to the performer — one long note played on the tailpiece of the cello. It sounded a bit like a foghorn. (Cellist András Fejér had to get a student of his who specializes in unusual effects to show him how to play it.)

The overwhelming impression left by MacMillan’s quartet, however, was of high-pitched sounds. In the opening movement, full of lines seemingly at cross purposes to each other, random disjointed, high-pitched sounds were heard: high-pitched to the extent of a long section of harmonics, and random to the extent of an aleatoric passage, where the performers improvise within preset limits. And the finale featured more-lyrical melodic lines with even higher-pitched sounds than before. Eye-watering, migraine-inducing, piercing sounds they were, which at the very end of the piece rose up to disappear off into the ether.

In Praise of Seamanship

Strangely enough, Schumann’s Op. 41, No. 2, Quartet sounded a bit like that, too. This is the most problematic and least-played of his three quartets. Its consistent use of key signatures containing flats — from the F-major tonic through C minor all the way to A-flat major — notoriously don’t sit well on strings. Nor did the work itself sit well Saturday on the Takács Quartet. The first movement was almost as disjointed as MacMillan’s, full of conversational cross talk; the slow movement, whose short–long rhythmic pattern should have the easy naturalness of breathing, lacked flow or emotion; and the fast-paced finale seemed crabbed rather than lyrical. And could the mighty Takács be finding some trouble with intonation and fast figures in the scherzo?

At last, though, everything came together for the Beethoven: the second Rasumovsky Quartet, Op. 59, No. 2 in E Minor. This was what we had come to hear. Suddenly, everything worked right, even the acoustics. Harshness vanished from Dusinberre’s violin. Even in stratospheric range it had the gorgeous lyricism he does so well. The instruments spoke together and in response to each other. Except for some continued lack of strength in the cello, the parts were all balanced. Violins crisply handed off phrases to the lower instruments. An opening sense of mystery evolved into energy in the first movement. The finale drove firmly along, picking up even more vigor in the coda, just where it’s needed most. And the Molto Adagio was perfection, breathing slowly in just the way that Schumann’s Andante had not, culminating in a perfectly matched duet between Dusinberre and Schranz where their parts intertwine. The movement came to an end like a huge ship slowly putting into harbor, moving at a crawling pace without losing momentum, and under absolute control all the way.

This is the music the Takács Quartet was born to play. At the postconcert question session, one audience member asked the musicians whether playing a new piece in the same concert affected their view of Beethoven. They looked incredulous. For them, Beethoven is Beethoven. Other composers wash up against him like a wave against a rock. He’s not unchanging — his work has unplumbed depths and is always daring — yet for these performers he is unmatchable, and in his music, so are they.