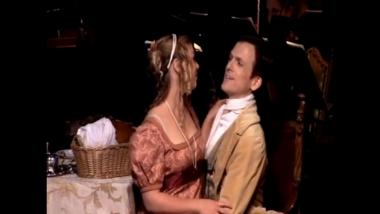 Domenico Cimarosa isn’t quite a household name in the opera world. His 1792 big hit, Il matrimonio segreto (The secret marriage), hovers at the fringes of modern repertoire. The chance to see these little-known confections (albeit only in English translation) is one of the services Pocket Opera provides the Bay Area opera community.

The plot is insubstantial. The wealthy and half-deaf Geronimo has two daughters, Elisetta and Carolina. Carolina is secretly married to Geronimo’s secretary, Paolino. Paolino hopes to win his employer’s favor (and forgiveness for his secret marriage) by arranging a dazzling match for Elisetta, with the Count. The Count arrives, takes one look at the two girls ... and immediately falls for Carolina. Plots and recriminations ensue, until finally Carolina and Paolino, caught in a compromising situation, are forced to confess their marriage. The Count settles for Elisetta (on the condition that Geronimo forgive Carolina and Paolino), and everyone is happy.

The Secret Marriage largely succeeds on the strength of its six-person cast. Sopranos Liesl McPherrin (Carolina) and Autumn Allee (Elisetta) make a charmingly contrasting pair of sisters. McPherrin’s Carolina is short and vivacious, with brilliant top notes and winning comic chops (though unconvincing “woe is me” poses when things are going badly). Allee’s Elisetta is tall and haughty, with jewel-like tones in her middle range and crisp coloratura. As the Count caught between them, velvet-voiced Spencer Dodd cuts a humorous, bumbling figure. Lawrence Venza makes a genial, funny Geronimo. What his warm sound lacks in legato, it makes up in expression. As his sister Fidalma, mezzo-soprano Kathleen Moss displays a big, unrestrained voice and an uncanny ability to scream at people on pitch. Tenor Jonathan Smucker gives Paolino a bright, grainy tenor and charismatic presence.

Ted Zoldan’s direction keeps the action brisk and farcical. Characters spend much time catfighting, smacking each other with fans, playing keep-away with mirrors and handkerchiefs, and crawling under furniture. It’s a testament to the singers’ technique that they do all these things while singing, without a note wavering. Sets and costumes are in the usual minimal Pocket Opera style. The gentlemen prove a stylish bunch, particularly the Count in his sharp, striped waistcoat. The ladies suffer from a sad lack of sartorial know-how, appearing in dresses made from hideous prints, with strange standing trim.

Opera buffa from the late 18th century has an unfortunate tendency to sound a lot like Mozart but not quite as good. The Secret Marriage is no exception. The score includes some jaunty tunes, breakneck patter, and a good deal of wry commentary from the violins. It’s cute and serviceable but lacking in brilliance. A more confident orchestra might have made up for that, but the Pocket Opera Orchestra’s timid (and sometimes muddled) playing made the score’s deficiencies apparent.

The second-rate music also got a second-rate libretto translation, by Pocket Opera standards. To be clear: all of Donald Pippin’s singing translations, including this one, far exceed most translations in print or performance. This text for The Secret Marriage was singable and mostly natural, and it included some funny rhyming misunderstandings for hard-of-hearing Geronimo. Pippin’s best translations feature wordplay and rhymes so deviously witty they cause double-takes; this had no such moments. (La belle Hélène, also performed this season, did.) It’s also possible that some good lines were missed, because Pocket Opera chose not to present supertitles with the recitatives. The singers were usually — but not always — comprehensible.

It was a treat to see Donald Pippin in the house after his recent health struggles. He stumbled through narrations for both acts — fighting a misbehaving microphone and easily confused character names. Though the narration was neither necessary nor entirely comprehensible, Pippin’s supporters rewarded his efforts with warm applause.

The Mozart of the Champs-Élysées proves a match for G&S in Pocket's witty, well-sung production.