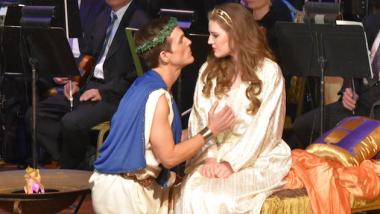 What really happened between Paris and Helen before they ran away to Troy together? Homer doesn’t tell us, but Offenbach fills in the gaps (with an added dose of nineteenth-century political satire) in his toe-tapping operetta, La Belle Hélène. Venus promised Helen to Paris in exchange for her victory in the goddesses’ beauty contest, and she’s determined to keep her oath. Helen wants to stay faithful to her husband Menelaus, but Paris’s determination and Venus’s interference conspire against her virtue.

The production is in Pocket Opera’s usual, irreverently traditional style. Daniel Yelen’s sets feature fake flames, spears, and a gold-monogrammed throw pillow for Helen. The costumes, by Taurean Feaster, are straight out of A Funny Thing Happened on the Way to the Forum: knee-baring tunics, shiny gold armor, laurel wreaths, and draped dresses. The resulting aesthetic is tongue-in-cheek about its own low-budget charm. In a funny moment of fourth-wall-breaking self-awareness, the narrator introduces the arrival of the golden galley from Cythera (Paris entering, holding a sail on a stick) as “one of the loveliest effects Pocket Opera has yet attempted.”

The narration, delivered by Craig Knudsen, entertained and kept the plot moving along quickly. Knudsen spoke with unaffected naturalness, while using dramatic pauses and pitch changes to highlight the humor of his script. Even his recovery after tripping over a tongue-twisting line garnered laughs. The acting in the rest of the piece was a mixed bag. Funny gags and good chemistry among characters usually kept scenes engaging. During solo arias, singers sometimes seemed to move stiffly from assigned pose to assigned pose. Ill-advised background business from minor characters occasionally distracted from the action.

Vocally, this was the strongest, most consistent cast I’ve heard Pocket Opera assemble. They sounded great all together in the finales of each act — the 13-person ensemble made so much (beautiful) noise that I didn’t miss a full chorus. At the heart of the show, soprano Erin O’Meally made a perfect Helen, preening and pouting her way around the stage. Her sparkling voice had just the right tessitura for the role, and she gave her singing expressive and dynamic variety.

Helen is, of course, surrounded by men. There’s her comic foil of a husband Menelaus, grumbled and muttered and trudged out by Michael P. Mendelsohn. And then there’s her lover, the handsome and arrogant Paris. Tenor Jonathan Smucker gave the prince a warm, winning voice in his lower and middle ranges, though his sound became strained and monochromatic at the top. Orestes, whose only purpose in the opera seems to be singing about women and wine, was brought to life by trousered mezzo-soprano Jessica Blau with convincing swagger and a muscular voice to match. Michael Grammar’s large stature and sound made him a commanding figure as the blustering, unscrupulous priest Calchas.

Music Director David Drummond conducted from the piano, keeping the orchestra well-coordinated. The accuracy of his piano playing was also a welcome change from Donald Pippin (though Drummond didn’t turn around on the piano bench and provide witty spoken transitions as Pippin does). The Pocket Philharmonic created an energetic, full sound. Intonation issues from the oboe (in the overture) and the violins (in Act III) didn’t detract from the lively spirit of the performance.

La Belle Hélène is Pocket Opera at its best. Its catchy tunes and light-heartedness play to the company’s strengths. Donald Pippin’s English-language lyrics are the cleverest I’ve heard, especially in the entrance of the kings (Act I) and Helen’s invocation to Venus (Act II). (“Return, return / to your shell ‘n / leave Helen / alone” is just one of many unexpected and brilliant rhymes.) This show won’t convert any snobs who disdain light opera, but the Savoyards in the crowd will surely leave with newfound appreciation for Offenbach, and for Pocket Opera.

There is one more performance of La Belle Hélène at the Gunn Theatre at the Legion of Honor, Sunday, March 11 at 2 p.m. Details and tickets at the Pocket Opera event page.