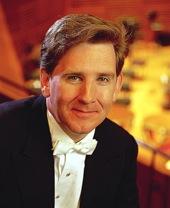 For pretentious types, the term Freeway Philharmonic carries deservedly pejorative overtones. Regional orchestras, with precarious funding and limited seasons, tend to offer reliably safe fare, of the overture-concerto-intermission-symphony variety. Separate audiences attend a moneymaking pops series given minimal rehearsal. It was heartening, therefore, to hear Music Director Alasdair Neale leading the Marin Symphony in a Sunday program that challenged the dingy rituals of both “masterworks” and pops concerts. It was even more heartening to see a new work by a Bay Area composer steal the show.

Northern California hosts few conductors as technically assured as Neale, whose control of ensemble makes a real difference when glitzier gigs siphon off the top-shelf brass a bridge or two away. The main element of orchestral pops is the familiarity of the tunes, plus the pizzazz of the arrangements. Leonard Bernstein’s familiar “Symphonic Dances” from West Side Story, which opened the concert, are a guaranteed crowd-pleaser. By giving the works adequate preparation, Neale elicited a polished reading that underlined the suite’s musical strength and defied the multipurpose Marin Center Auditorium’s subversive attempts to magnify every imperfection through its dry acoustic.

Premiered by the Oakland East Bay Symphony in 2008 and performed by several orchestras since, San Francisco native Nathaniel Stookey’s Zipperz (a soaPOPera) is that rare 40-minute new work that garners repeat performances. The piece is best described as a cantata for two singers, written and performed in the style of Sondheim. In a time when Broadway pit bands consist of just four synthesizers, trumpet, and drum set, Stookey’s music underscores how many avenues are open to composers willing to find inspiration in the techniques of pop and apply it to a full orchestral palette. It may even come to define a Bay Area school of composition (John Adams, Mason Bates, and Lou Harrison come to mind).

The excellent soloists in this work — soprano Robin Coomer and tenor Manoel Felciano — performed with all the flair, amplification, and charm one associates with good Broadway actors. Most importantly, the audience could understand and enjoy librettist Dan Harder’s comedic poetry just from the singers’ raw delivery. Broadway shows can spend months in previews tweaking jokes to refine the timing, but Stookey and Harder lacked such luxury.

The concert’s marketing included this warning: “Zipperz deals with adult subject matter and may not be appropriate for younger audiences.” Actually, it’s entirely appropriate. Young people are confused by the disconnect between what they are told and what they see and hear in the real world. Although Zipperz’ characters do the nasty (offstage) and indulge in an occasional profanity, youngsters are done a disservice when they are shielded from the valid and healthy use of more colorful aspects of life in an artistic and creative context, rather than a vulgar one.

If any classical music truly deserves a PG rating, it would be the work of Richard Wagner. His music is so good, as Neale’s refreshingly relaxed tempo leadership of the Procession and Chorale from the final scene of Die Meistersinger demonstrated, that young audiences may not detect how this scene pillories a character often taken as a Jewish caricature and culminates in the opera’s hero exhortation to preserve German art from foreign threats. Acknowledging how the German composer’s insipid and revealingly naive anti-Semitism led to the appropriation of his works by the National Socialists is crucial to appreciating his work. For impressionable youth, this is far more dangerous material than a little sex.

Also featured in the concert was the Marin Symphony Chorus, consisting of some 80 singers plus a few professional “ringers,” which produced a respectably full, well-tuned sound in choruses by Wagner, Verdi, and Leoncavallo. My only complaint was the distinct American vowels in their foreign language singing; without translations in the program book or elsewhere, there was no reason not to sing in “American.” The audience was left to mentally fill in the more familiar “Here comes the bride” translation to the famous Bridal Chorus from Wagner’s Lohengrin. In the opera, the music occurs after the ceremony with a text celebrating the “delights of the heart” in the “sweet-smelling room decked for love” as a full crowd escorts the bride to the master bedroom to consummate the relationship ... kinky.

Neale’s program concluded with the chorus and orchestra performing Borodin’s Polovtsian Dances from his opera Prince Igor, one more classical work that has crossed into the pop lexicon. In yet another supply-your-own-translation opportunity, I am sure many in the audience recalled the 1950s hit “Stranger in Paradise” from the musical Kismet. The orchestra worked a bit too hard not to overbalance the chorus in Borodin’s sensual score.

For all the familiarity of opera choruses, Zipperz remained a hard act to follow. I suspect even the most senior audience members could better identify with the everyday conflicts of a young dating couple than with the Mongol Khan Polovtsian seductress. By 1880, Wagner, who felt frustrated in his efforts to attain professional satisfaction in his home country, seriously contemplated emigration to Minneapolis, or Milwaukee. Something about that seems wrong.