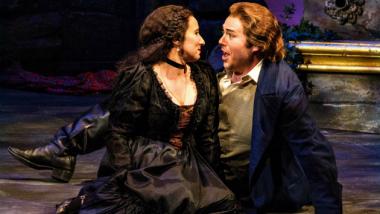 In 1835, Italian composer Gaetano Donizetti took a Scottish novel full of blood feuds, vengeance, duty, unrequited love, and the demands of honor and then added a tangle of Italian emotion, stirring the pot until the heroine went mad. The result was a great opera. On Sunday, March 22, Livermore Valley Opera finished their season with a splendid rendition of Donizetti’s masterpiece, Lucia di Lammermoor.

That complex plot, along with an exceptionally lyrical score and singing that is the apex of the bel canto tradition, was done to the nines in Livermore’s Bankhead Theatre with an army of volunteers creating the choruses, sets, and costumes — all arranged by Candace Evans’ clever directing.

While Evans’ production was all about the clarity of the drama, it was clear she also enjoyed leaning on moments of tension. Her staging was active and focused, and the dramatic pauses stretched a fat heartbeat past comfort. The opening and closing scenes were so spectrally lit that we were propelled into the characters’ inner darkness.

And those characters! Topping an excellent cast was Erin Sanzero as Lucia, throwing herself into the role (and sometimes lying about the stage as she sang) with a voice that was as agile and tight-grained as some exotic hardwood. Added to that was her deep immersion in a difficult persona that cycled manically from love to despair and then began to crumble.

Lucia’s brother, Enrico, was delivered with palpable rage in a sumptuous baritone by Roberto Perlas Gomez, abetted by a physicality that was scary. Now the head of the family, and infuriated that she has matched herself to his ancestral enemy, Enrico used deception and threats to force her wedding to his political ally, Arturo, sung crisply by Michael Dailey.

And comforting Lucia with a richly-hued mezzo was Nikola Printz as the maid, Alisa. Their duets were memorable.

In the curious center of this tangle, and trying to hold it all together, is the family priest. That role was sung by Kirk Eichelberger, whose incomparable bass voice brought a landscape of moral certainty to its deep register. And in the usual course of great tragedy — and to his horror — it is partly due to his certainty that tragedy occurs.

Conductor Alexander Katsman led a seasoned troop to this battle of the Lairds using a small pit orchestra that filled the 500-seat theater with a sound that was full, yet sharply defined. Each instrument sounded bright. A hats-off to the ensemble and to the excellent acoustics of this Valley jewel.

The two French horns were splendid, entering in exceptionally soft notes as they began the fray from afar and then swelled to a majestic call to arms. Emily Laurance supplied piquant harp arpeggios throughout, and then shone in a long solo in the first act interlude. And flutist Karen Stasko Veca was fever-bright in the mad scene, leading Lucia into that land beyond despair in a call-and-response aria that every soprano aspires to perform.

In fact, the whole opera frames that one long aria, the breaking of Lucia. Sanzero became so convincing towards the end that I saw tears flow around me.

Looking at these historical characters may beg the question of their relevance, and perhaps a modernist would want to re-imagine the opera as life without family therapy or serotonin re-uptake inhibitors. But the passions we saw that afternoon did not need updating; they are timeless.

Adam Broner was born in New York City and raised in Detroit, accounting for his yen for travel and rich fantasy life. The son of a printmaker and feminist author, he has been the music critic for the Piedmont Post for the last eight years, is a contributing author to theBerkeley Times and the co-founder of the online arts journal Repeat Performances