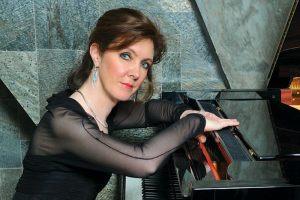 Heuwell Tircuit on June 8, 2009
Prokofiev’s nine piano sonatas form one of the major cycles of the 20th century, and have often been recorded individually. But complete sets in one package are exceedingly rare. So Prokofiev specialist Anne-Marie McDermott’s new set of all nine, in modern sonics, fills an important gap. And her virtuosity and stylish performances are a delight. As a tasty bonus, the collection includes Prokofiev’s antsy, early Sarcasms, Op. 17.

Prokofiev was a prodigy. He was only 13 when he completed a piano sonata, and by age 18 had written five more, plus a caboodle of small pieces for piano or violin with piano. Three of those early sonatas were later revised and added to his official list of the nine (sonatas No. 1, Op. 1, No. 3, and No. 4, the latter two subtitled “From Old Notebooks”).

There’s no shortage of variety among the nine. The First and Third are each in a single, tempestuous movement. The Fourth, in C Minor, is in Prokofiev’s mature, contemplative vein, with two lyrical movements, and a flashy finale tacked on. Others range in mood from the violent Seventh in B-flat Major — his most often programmed and recorded — to the classicism of the Fifth in C Major, with its hint of Mozartean textures. This last was published as Op. 38 but in 1953, the year of his death, Prokofiev rewrote it, adding more spicy clangor, and assigning it a new opus number, 135. McDermott plays the later version.

The Seventh is the middle member in the trilogy of what are often called the “War Sonatas,” written during World War II. These are easily the most serious works of the cycle. The Seventh earned Prokofiev his first Stalin Prize and, indeed, was originally subtitled “Stalingrad.” By contrast, the Eighth consists of two plaintive slow movements and a lighthearted finale. The Ninth, written in 1947, strikes me as the weakest of the lot, and rather bland.

McDermott has been appearing internationally for over a decade as soloist, accompanist, and chamber musician. Recently, her Bridge release of the complete Gershwin piano-orchestra works with the Dallas Symphony drew rave reviews. But she’s been much praised for her Prokofiev cycle as well, which she has played live at Lincoln Center, the University of Arizona, in Portland, and Los Angeles.

Her playing is remarkably akin to Prokofiev’s own. Hammered, biting staccatos and sharp accents give many movements a crisp profile without sounding as if she were banging the keyboard with a plank. But her lyrical playing is, if anything, even better. Like Prokofiev, she features subtle bits of rubato that help the melodies breathe. Yet she never slips into late Romantic swooning, coaxing, rather than forcing, the emotions out of the piece.

The set is highlighted by Bridge’s bravura, well-balanced sonics. (They’ve always had a special way with piano sound.) It is well worth the asking price.