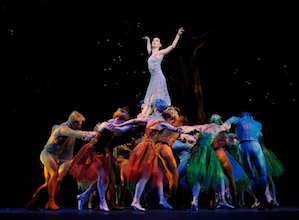 San Francisco Ballet’s new Cinderella, which had its U.S. premiere Friday night with a cast headed by Maria Kochetkova in the title role, is magic. We should by now expect no less from its choreographer, Christopher Wheeldon, creator of The Royal Ballet’s dazzling Alice in Wonderland (2011, available on DVD) and a frequent contributor to the San Francisco Ballet repertory.

A coproduction with Dutch National Ballet in Amsterdam, where it premiered last December, Cinderella was put together partly here and partly there. The fairytale, with contributions from Charles Perrault and the Brothers Grimm, goes way back to the 17th century. The first ballet version, choreographed by Marius Petipa, Enrico Cecchetti and Lev Ivanov to music by Baron B. Fitinghof-Schell, premiered at the Mariinsky Theater, St. Petersburg, in 1893. But Serge Prokofiev’s ballet score didn’t premiere until 1945 at the Bolshoi in Moscow. He’d finished writing it the year before. Rotislav Zhakarov was the choreographer. With all the versions — Frederick Ashton’s (1948) the best by far — that have flown around since then, you’d think it was older.

So the ballet Cinderella is beloved and sought after and, thanks to its knotty score, no walk in the park. Wheeldon, in company with a superb creative team — including master puppeteer Basil Twist, set and costume designer Julian Crouch, and lighting designer Natasha Katz — has let Prokofiev be Prokofiev, taking advantage of the dark moments as well as its brightwork in the score, all wonderfully conducted by music director Martin West.

Young Cinderella’s mother suddenly dies, her father remarries, and Cinderella’s animosity gives the stepmother and her two daughters an excuse to be mean to her. No fairy godmother comes with a pumpkin to bail her out, but there is more sustaining wizardry in the form of the four Fates, who help protect her. Wearing dark masks and clothing that lets them blend into the backdrops, they lift and swoop Cinderella throughout the ballet. So although she dances exquisitely — would you expect any less from Kochetkova? —the strong yet gentle Fates (Daniel Deivison, Garen Scribner, Anthony Spaulding, and Shane Wuerthner) add a fillip of freedom, flight and, of course, fantasy.

The libretto, by playwright Craig Lucas, gives Prince Guillaume (Joan Boada) a best friend, Benjamin (the excellent and winsome Taras Domitro), which allows the prince to act as a commoner and vice versa, a switch on Grimm disguising the Fairy Godmother as a beggar woman.

The effect is the same, hilariously exposing the Stepmother Hortensia (Katita Waldo) and the stepsisters for the gold-digging snobs they are — or at least until Stepsister Clementine (Frances Chung), who isn’t really so bad, and Benjamin fall in love. (The other one, Edwina — Sarah Van Patten — is hopelessly nasty, but very amusing.)

Before the ball, under the tree, Cinderella learns how to dance from the spirits of the four seasons, including the lightness of Spring (fleet-footed Clara Blanco) and the mystery of Autumn (Hansuke Yamamoto, with marvelous elevation).

Then, at the palace, the Prince falls madly in love with Cinderella, but her jealous stepmother rips off her golden mask as she runs away, losing a golden slipper. The ballroom, by the bye, has a bazillion chandeliers (okay, maybe 51) and the waltzing couples are costumed in raucous shades of blue and magenta.

Choreographically, you could not wish for more. The story is told entirely through the dancing. There’s no mime, although, as a row of motley characters assembles before Benjamin and Prince Guillaume to try on the golden slipper, there are delicious double-takes and slapstick. The ensemble dances, solo variations and pas de deux are light and quick; even when her Fates are on a break, Cinderella moves as if she’s floating on feathers.

Cinderella’s final pas de deux with her prince is private, for just the two of them; the wedding guests are standing upstage, under her mother’s magical tree, and the moment is filled with charm. As the newlyweds dance, Cinderella moves with increasing freedom and passion, celebrating their love. Boada is as princely a partner as any ex-waif could wish for.

And all the wishes do come true. In case we had our doubts about magic — even after a tree grew from Cinderella’s tears, and portraits became animated as they hung on the castle walls — those reservations were swept aside for good midway in the proceedings, when Cinderella was transformed for the ball. She exchanged a tattered blue dress to a ball gown and mask that sparkled with gold. She wore a billowing silken cape that seemed to envelop the stage. She rose onto a chariot that had suddenly materialized, with cross-sections of plants to form its wheels. Pulling it were the four Fates, now transformed into crystal-headed stallions.

It was a spectacular moment. We were reminded of what Audrey Hepburn said in the film Funny Face, as she floated down the Louvre’s grand staircase, her cape billowing behind her: “Take the picture, take the picture!” What brilliant, memorable pictures Wheeldon, and the company, have made.