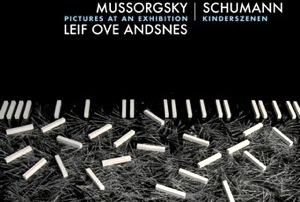 Pictures Reframed, a multimedia presentation of Modest Mussorgsky’s Pictures at an Exhibition that unites the pianism of Norway’s Leif Ove Andsnes (b. 1970) with the graphics and film of South African visual artist Robin Rhode (b. 1976), is a stunning achievement. Far more than merely another multimedia collaboration for our multitasking, iPod-toting era, it brilliantly illumines Mussorgsky’s achievement in ways that transcend the literalism of words, images, and notes on a page.

At the same time that Andsnes is touring Pictures Reframed from Moscow to Houston (the closest it gets to the Bay Area), EMI Classics has released an elaborate package consisting of a 152-page, coffee-table-size picture book that weighs over two pounds; a DVD that contains a wonderfully filmed live performance of Pictures Reframed plus a 50-minute documentary, titled Leif Ove Andsnes – Reframed; and a studio-recorded CD that pairs the Mussorgsky with Robert Schumann’s Kinderszenen. While the CD is also available separately, the only way to see Pictures Reframed, short of flying to Houston, Washington D.C., New York City, or London, is by buying the entire package.

The DVD is pretty spectacular. The final “picture,” in which Rhode merges Andsnes and Mussorgsky’s take on “The Great Gate of Kiev” section with the murder-by-drowning of a grand piano, sounds as outrageous as it is bizarre, but it works. There’s no way to adequately describe how uncontrolled water rushing through the strings and over keys complements Andsnes’ controlled pounding over same, save to say that the artistic union so transcends the sum of its parts that it’s difficult not to cheer at the ungodly sacrifice of art in the name of art.

Equally moving is the documentary. From shots of Andsnes at the start of his spectacular career to scenes of the flourishing friendship between the classical artist and the visual artist who adores rap, it eloquently explores the collaboration between two equally dedicated but distinctly different personalities.

Because the Pictures recording was born out of multimedia merger, it seems more useful to discuss the studio recording of Kinderszenen, which was always intended to stand by itself. Andsnes’ pianism is, of course, impeccable and beyond reproach, though the recording is a little too distant and resonant. The contrast, however, with another recent Kinderszenen from EMI, on pianist Martha Argerich and violinist Gidon Kremer’s live Berlin Recital, could not be greater. Besides the acoustics (Argerich’s piano is recorded closer-in, with more vibrancy on top), Argerich’s fluidity, frequent changes of tempo, and poetic use of rubato sing a different tune than Andsnes’ straight-ahead approach. I suppose the Norwegian’s simplicity is, in one sense, more childlike. But hearing Argerich dance and sway over the keys, and savoring her mercurial shifts of genius, is like experiencing the Golden Age of music reborn.

I expect SFCV readers are hearing a lot about Pictures Reframed these days, on the heels of its premiere last Friday in New York. The only way to know what the much-deserved fuss is about is to spring for the entire, perfect-for-holiday-giving package.