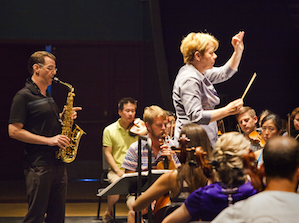 Three composers graced the second Saturday concert at the Cabrillo Festival: a videographer, a watchmaker, and a pyromusicologist. The first overstretched the description of a peak lifetime moment. The second constructed a faceless timepiece, exposing minutely interlocking, redundant cogs. The third, inspired by heat-wave and wildfire, developed motivic elements in a riveting sonic arena.

Gabriella Smith (b. 1991) was a composition student of Jennifer Higdon and has been identified for inclusion in the festival by composer John Adams and Music Director Marin Alsop as an “exceptional talent” of the “next generation.” She certainly has a talent for orchestration. She has an even greater talent for prose poetry, as evidenced by the first of only two sentences she used to describe her work in the program:

Tumblebird Contrails is inspired by a single moment I experienced while backpacking in Point Reyes, sitting in the sand at the edge of the ocean, listening to the hallucinatory sounds of the Pacific (the keening gulls, pounding surf, rush of approaching waves, sizzles of sand and sea foam in receding tides), the constant ebb and flow of pitch to pitchless, tune to texture, grooving to free-flowing, watching a pair of ravens playing in the wind, rolling, swooping, diving, soaring — imagining the ecstasy of wind in the wings — jet trails painting never-ending streaks across the sky.

Per her description, Smith’s music accurately re-created the sonic interfusion of her Point Reyes “moment,” ingeniously employing devices such as bowed cymbals, woodwind keens, fluttering snares and strings, and a myriad of glissandos. For me, however, only the sounds, not the moment itself, were re-created. When you are hallucinating, an hour may seem like a subjective minute. When you are a music critic, a 12-minute “moment” of graduated glissandos and sonic devices may seem like a nine-minutes-too-long Gloria Coates gesture set. Whether or not her compositions develop more concision in the concert hall, Smith, with her ear for sound, could have a lucrative career ahead of her in Hollywood.

Also on the bill was John Adams’ saxophone concerto, which was premiered a year ago at the Sydney Opera House. It is characterized by its complex assemblage of little riffs, jerky melismas, and technical challenges to the soloist — all of which were marvelously negotiated by Timothy McAllister, whom Adams introduced to the audience as “the world’s greatest saxophonist.” On first hearing, despite its worthy structuring and plethora of detail, I found the music curiously uninvolving. The instrument did not shine in its best light. Surprisingly, unless you count piano and celeste, no percussion instruments are scored for this highly rhythmic work. The best music is found in the second half of the first movement, about nine minutes in — the “funky part,” as Adams put it — where wild notes fly all over the map.

The third featured composer, the Australian Brett Dean (b. 1961), describes his 2011 Fire Music as

… a response to the disastrous ‘Black Saturday’ bushfires of 2009.… As the composition progressed I moved beyond the original trajectory of the fire itself and the piece started to follow its own internal, music-based logic. Nevertheless, the character of the force of destruction and ultimately rebirth that comes from such a fire remained the energetic source of material.

The entirety of Fire Music proclaims Dean as one of the four or five top masters writing today. Dean makes a key point regarding the importance of “internal, music-based logic.” It was his logic, not just his evocative orchestration, that made his entire 40-minute opus involving, in contrast to only 25 percent of Smith’s “moment.” Not to mention Dean’s hefty dose of spatial theater.

High up in the rafters of the Santa Cruz Civic Auditorium, Alsop placed (per Dean’s instructions) two trios of percussion, trumpet, and flute, one on each side of the stage. In addition, she placed a string quartet on risers behind the orchestra floor seats. Dean played these groups both off each other as well as together with the orchestra, with consummate skill. At times, drums and/or trumpets were ping-ponging back and forth to great effect, enveloping the audience in sound.

Alsop’s charges’ dedication and skill now bring the festival focus where it should be: on living composers and their works, not on incidentals.

True to his description of evoking heat and fire, Dean began his Fire Music with a bowed gong, bass drum, and bowed thunder sheet. Later, flute trills emerged, followed by orchestral buzzing sounds that sounded like flame licks. But after a few minutes, it became apparent that many of the “mere” sound effects were beginning to morph into discernible motives ripe for musical development.

Of particular interest was a rocking phrase carried by the rear quartet. This and the other motives built to an enormous climax about halfway in, and a second, even more chaotic, one starting about three minutes before the end. In between were fascinatingly expressive diversions of the material, the entirety of which proclaims Dean as one of the four or five top masters writing today. Decide for yourself when this concert will be rebroadcast at 7 p.m., August 19, on radio station KUSP.

I am happy to report that Marin Alsop’s direction and preparation of her orchestra has been so exemplary this season that little needs to be said of it, other than that her charges’ dedication and skill now bring the festival focus where it should be: on living composers and their works, not on incidentals. Bravo!