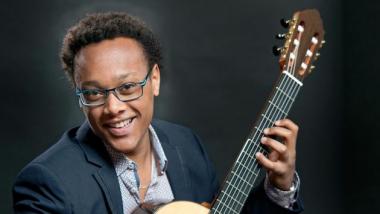 Performance venues come and go but audience desire to hear inspiring performances by great artists remains. San Jose’s beautiful Trianon Theatre, modeled after the Petit Trianon on the grounds of the Palace of Versailles in France, has changed owners and this year presenters including the San Jose Chamber Orchestra and the San Jose International Piano Competition have had to find new venues. Saturday’s recital by the phenomenal French guitarist Raphaël Feuillâtre was presented by the South Bay Guitar Society to an large, enthusiastic, and seemingly undeterred audience at Foothill Presbyterian Church in San Jose, a venue with less architectural distinction but with excellent acoustics.

Feuillâtre, the 2018 first prize winner at the prestigious Guitar Foundation of America Competition, is being introduced to audiences in the United States on a 50-city concert tour that is the most important component of his prize. An infectiously enthusiastic 24-year-old black man, he ran on stage, took an introductory bow and performed an engaging program full of surprises and artistic depth.

Three pieces by Agustin Barrios showed how deeply the composer had studied earlier music. Preludio Saudade is an introspective reflection on Bach’s Preludes for keyboard. Valse, Op. 8 No. 3 and Mazurka Appassionata are meditations on Chopin’s compositions. Feuillâtre’s approach, always sensitive to the exquisite harmonic changes, employed the full expressive possibilities of tone, color, and tempo rubato.

Variations on a Theme of Sor by Miguel Llobet is based on a Baroque harmonic progression popular with many composers. In addition to quoting Fernando Sor’s arrangement of La Folia de España (Follies of Spain), Llobet wrote his own spectacular series of variations all of which, including a delicate section entirely in harmonics and a spectacular section for left hand alone, Feuillâtre performed with aplomb.

Leo Brouwer’s La Gran Sarabanda, like the Llobet composition, is a contemporary meditation on a Baroque music in a series of inventive variations and was the required piece in the 2018 GFA Competition. Brouwer is the most influential composer for guitar of the modern era and it was a delight to have a new work by the 80-year-old composer performed so expertly by the winner of that competition.

Sergio Assad’s Aquarelle (Watercolors), the major work on the second half of the concert, is an impressionistic three-movement composition inspired by the way visual artists blend watercolors. In the opening Divertimento, Feuillâtre played the three-note motive on different strings so they rang over each other like blended paints. The middle movement, Valseana, featured a hauntingly beautiful melody which allowed the artist to showcase his lyrical gifts. The final Preludio e Tocatina is an ebullient work that Feuillâtre interpreted as an homage to the joy of being alive.

The remainder of the program was given over to smaller compositions that had a major impact. Alfonsina y el mar (Alfonsina and the sea) is an homage by Argentine composer Ariel Ramirez to the popular poet Alfonsina Storni. Three preludes by Heitor Villa-Lobos, Alexander Scriabin, and Rachmaninoff were played as a concluding set. Feuillâtre performed the Prélude No. 5 by Villa-Lobos as an evocation of social dances done in elegant ballrooms in turn-of-the-last-century Brazil, the Prélude pour la main gauche, Op. 9 by Scriabin as a haunting melody. Rachmaninoff's Prelude in G-Minor, Op. 23 No. 5 is a piano warhorse that Feuillâtre made fresh with a successful, if improbable, arrangement for guitar.

The enthusiastic audience was rewarded with an encore performance of Clown Down (Gismonti at the Circus) by Roland Dyens, which referenced Egberto Gismonti’s driving rhythms, infectious ostinatos, ingenious use of special effects, and captivating combinations of strumming and percussion. This perfect encore left a cheering crowd on its feet.

The guitarist’s mastery spanned works from different centuries and continents.

The Korean virtuoso’s musicality is on display in Latin-American masterworks.

Xuefei Yang Is a Revelation in a Contemporary Chinese Piece

The guitar virtuoso shines most brightly on the more daring repertoire choices.