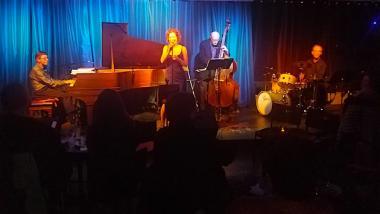 “Jazz is like a fine wine,” vocalist Rebecca DuMaine opined at the Sound Room, on Broadway in Oakland. “You have to have had a little life and a little grit to understand it.”

What was served up on Saturday evening sounded more like wine than like whiskey or something wilder. And it fit the temperate venue, run by the nonprofit Bay Area Jazz & Arts Inc., where co-owner Karen van Leuven informed me that each of the many fine wines served there has, surprisingly, a connection with jazz. My glass of a red proprietor’s blend, for example, was among the wines cultivated by jazz guitarist Eddie Pasternak, who will himself be appearing at the Sound Room on May 6.

DuMaine, who’d been for many years a New York-based actress and teacher (at the Actors Studio and elsewhere), returned to her native San José area about eight years ago to be nearer her father and fellow performer, pianist Dave Miller, while raising her own family. There was Broadway material in her two set lists, including the lyrical “I’ve Never Been in Love Before,” from Frank Loesser’s Guys and Dolls. DuMaine’s ticklish soubrette second soprano, though, might be a better fit with the comical material from the same musical, as it was with her ensuing delivery of the sassy Blossom Dearie favorite “Everything I’ve Got Belongs to You” (she named Dearie as an April 28 birthday girl and an influence) and the perky Gershwin standard, “Nice Work If You Can Get It.”

A mashup of “I’ve Got Rhythm” and “I Hear Music” also worked nicely, and in introducing and singing “Lulu’s Back In Town,” which she’d renamed and dedicated as “Posey’s Back In Town” (in reference to her adored local ballplayer), DuMaine seemed to be putting some of her acting chops in play. She totally sold Cole Porter’s “Love for Sale,” as a streetwise prostitute’s plea.

Miller accompanied daughter DuMaine handsomely as a dexterous and swinging pianist, and they were both ably supported by his partners in the trio, bassist Chuck Bennett and drummer Bill Belasco. Although father and daughter proved adept at phrasing, none of the musicians seemed inclined to stray far from the set melodies of their repertoire, drawn mostly from the so-called American Songbook and the standard jazz Real Book. or to explore harmonic substitutions and other experimental approaches.

This was more the tone of an intimate cabaret or lounge than of a kinetic jazz club, and the audience at the Sound Room, mostly middle-aged and Berkeleyish, reacted as appreciative devotees of both the ambience and the artists. The venue offered food as well as wine, in a warm and friendly spirit, and DuMaine had several of her Summit Records releases on sale, with a new one promised for later this year.

The singer’s tastier numbers included several Jobim bossas, and an interesting bossification of the forties hit “Tangerine.” Other good choices, acknowledged by DuMaine as drawn from her own era, included the Grover Washington, Jr./Bill Withers collaboration “Just the Two of Us,” on which the entire ensemble sparkled nicely. Aside from Brazilian Portuguese, DuMaine invoked the original French lyrics to Charles Trenet’s “Que reste-t-il de nos amours,” translated and retitled later as “I Wish You Love.”

A pleasant oasis in Oakland’s entertainment district, the Sound Room will have to relocate once again, under pressure from high rise development. But wife-and-husband owners van Leuven and Robert Bradsby, who hold down nonjazz weekday jobs, will sustain their weekend bookings, and continue to live-stream the venue’s performances at http://www.soundroom.org.