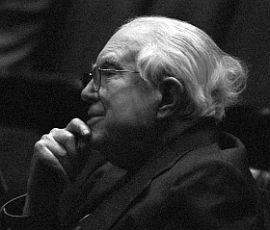 Noel Verzosa on October 28, 2008
In a tribute to the composer Elliott Carter's centenary birthday, Earplay devoted part of last Monday's concert at San Francisco's Herbst Theatre to his music and the rest to American composers. Although all but one of the works on the program were composed in the last seven years, they represented a diverse sampling of styles with which American composers have experimented since the start of the 20th century. Carter's remarkable career spans virtually the entire period during which America has been present internationally in the classical tradition, so it is fitting that Earplay made him the centerpiece of this survey of American music. The concert began with Jennifer Higdon's Dark Wood (2001) for bassoon plus piano trio. The ghost of Stravinsky could be heard throughout this energetically rhythmic piece, declaring his influence on the "modern" repertoire, especially in America. (Stravinsky, in particular, was a central model for the famed Paris-based Nadia Boulanger and her illustrious pupils, who included Aaron Copland, Virgil Thomson, and Carter.) As Higdon noted in the program, Dark Wood showcases the bassoon within the context of a traditional chamber ensemble. On paper, it's an anomalous coupling of instrumental forces, yet Earplay made it sound remarkably natural. Bassoonist Rufus Oliver deserves a good deal of credit for his work. He confidently led the way, while at other times he fell back comfortably into a supporting role, handing the reins to violinist Terrie Baune and cellist Daniel Reiter. Quietly holding the ensemble together was pianist Michael Seth Orland, propelling the work's kinetic energy with his usual laserlike precision. A triptych of Carter works followed. One of the true grand old men of American music, Carter is known chiefly for his formidable and forbidding complexity. One glance at his scores, heavy with arcane rhythmic patterns, constant tempo changes, and a harmonic language offering no hints as to its logic, can set your head spinning.

The Lighter Side of Carter

It was refreshing, then, to hear Earplay perform Carter with a gaiety not frequently associated with his music. First came Steep Steps (2001) for bass clarinet. While the musical language was characteristic of Carter — disjointed series of notes spanning all registers, only occasionally congealing into something melodic — the joy of the piece came in clarinetist Peter Josheff's demonstration of his instrument's versatility. Many members of the audience seemed surprised at just how many different kinds of sounds could come out of a bass clarinet. Next came another nod to Stravinsky, this one explicit: Carter's Canon for Three Equal Instruments "In Memoriam Igor Stravinsky," composed in the year of Stravinsky's death (1971). This wisp of a piece clocked in at under one minute, and the audience received it as the charming miniature that it is. Both the performers and the audience gave a chuckle when the piece ended. Finally, Carter's Au quai (2002) for bassoon and viola was performed with a sense of humor befitting the piece's punning title (pronounced "o-kay"). Bassoonist Oliver and violist Ellen Ruth Rose put on an impressive physical and acoustical display. Rose's part, especially, called for an almost theatrical showcase of violin techniques, but still the duo managed to humanize Carter's often inscrutable music. In stark contrast to the evening's lightheartedness, Eric Zivian's Trio for Clarinet, Cello, and Piano, in its premiere performance, offered much heavier and introspective fare. The composer himself took the piano, and though the work featured three musicians it was clear that it was an intensely private matter. Every dynamic swell and grand pause was accompanied by a full-body frisson. At several points Zivian's hand instinctively shot up as if wanting to conduct. The work's dramatic (at times melodramatic) rhetoric sometimes bordered on indulgent, but it was a welcome challenge to conventional assumptions about new music: Although Zivian's Trio was the most pointedly atonal work of the evening (though not without occasional triads), it was also the most Romantic.

Novelty With a Pedigree

The real novelties were reserved for the second half. Pablo Furman's Sureña (2005) was scored for violin and laptop. With Furman himself at its helm, the computer translated violinist Graeme Jennings' actions into electronic effects and fed them back into the piece. In effect, Jennings was accompanied by a sonic backdrop that he himself was generating. At times these effects consisted of brief echoes; at other times the computer seemed to create an entire electronic symphony. Amazingly, Jennings' wizardly technique proved to be more than a match for the computer, and he produced all manner of sound effects on his own. Closing out the evening was William Kraft's Vintage Renaissance and Beyond (2004), an essay in one of the tried and true techniques of 20th-century composition, pastiche. Here Stravinsky seemed to rear his head one last time, since it is to him that American composers owe the belief that pre-Romantic repertoires can be mined for anti-Romantic purposes. ("What has always attracted me to early music," Kraft writes, "was the directness and clarity of expression, as opposed to the dramatic and emotionally laden works in the 19th century repertory.") In Kraft's case, medieval antiphons and Renaissance dances provided the material. Kraft presented these preexisting tunes intact, adding "graffiti" here and there: mildly jarring harmonies, sporadic outbursts interrupting the tunes, faint echoes of previously heard music. In earlier times, this kind of anti-Romantic pastiche would have assumed a more polemical tone, but audiences today seem to have grown accustomed to it. Kraft's playful work elicited another good-natured chuckle from the audience at the end — perhaps a glimpse of promising directions that American music might take in the 21st century.
Noel Verzosa is a visiting assistant professor at California State University in Sacramento.