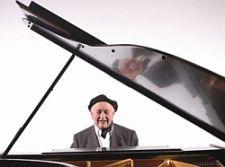 Anna Carol Dudley on April 22, 2008
Adam blamed Eve for yielding to temptation, and Elizabethan poets sighed over the inconstancy of women. In Mozart's opera Così fan tutte, men go to extraordinary lengths to test women's constancy. And so they did Sunday at the Legion of Honor, in Pocket Opera's production. Guglielmo and Ferrando, convinced that their lovers, Fiordiligi and Dorabella, will always be true, are seduced by Don Alfonso's bet that he can prove them wrong. Sure that they will win the bet, they agree to follow his directions for 24 hours. The two have to march off to war, then reappear disguised as Albanians and woo each other's ladies. Donald Pippin, master librettist, narrator, and creator of Pocket Opera, presided at his inimitable best. The eight members of the excellent Pocket Philharmonic were ranged at the back of the stage, with Pippin leading from the piano. He came downstage from his post occasionally to take the audience through the convoluted plot. His narratives serve both to initiate audience members new to the opera and to amuse cognoscenti by the distinctive spin he puts on a plot. His brilliant English translation of the libretto appeared as supertitles, which were helpful for complex ensembles in which individual singers were singing different lines. Occasional malfunctions in the supertitles revealed that, in recitative, the singers' exemplary diction sufficed.

All six singers were splendid actors, especially Marcelle Dronkers as Fiordiligi, Kindra Scharich as Dorabella, Nathaniel Hackman as Guglielmo, and Lee Strawn as Don Alfonso. Scharich's "Cravings implacable" (Smanie implacabili) was a standout, being beautifully sung as she emoted all over the stage and flung herself onto the floor. Dronkers' sensational "Even stronger" (Come scoglio) brought down the house. Blessed with a pleasing voice, she inhabits the character of Fiordiligi so thoroughly, in both gesture and song, that occasional lapses in tuning, widening of vibrato, or less-than-flawless triplets convince the listener (including this critic) that Fiordiligi is too overcome with emotion to be picky about her singing. Hackman's powerful voice anchored ensembles wonderfully, and his solo singing was expressive. He had little trouble overcoming Dorabella. Strawn's voice, less powerful but no less expressive, was well-used to make an impressive Don Alfonso. Jos Milton brought a lovely lyric voice to the role of Ferrando, sometimes overmatched in ensembles but used beautifully in all his solo singing. It is no wonder that Fiordiligi finally succumbed to his wooing, unaware that her sister Dorabella had been enamored of that voice until only a few hours before. Eileen Morris' sound suited the character of the maid Despina, and she was an able coconspirator with Don Alfonso. The voices she used to impersonate a medical quack and a lawyer could have been more exaggerated and sustained. Props and set design by Daniel Yelen and costumes by Prem Lathi worked well on the stage of the Legion of Honor's Florence Gould Theater. Movement, gestures, and double takes, whether created by stage director Igor Vieira or by the singers themselves, were effective and often hilarious. Elspeth Franks' excellent program notes provided historical background for Cosi and Mozart's role in the development of opera generally.

Donald Pippin has made wonderful English translations of a staggering number of opera libretti. And who else could find a way of rhyming torso with more so? Or cloister with oyster? Or poison with boys on? I hope he is also keeping records of all his spoken narratives. They sound ad-libbed, but I'll bet they exist in writing, and could be published eventually. Of course there is only one Donald Pippin, and his style is unique. But wouldn't it be a marvelous contribution to the general welfare if his libretti, combined with the narratives, enhanced the performances of pocket operas all over the country?