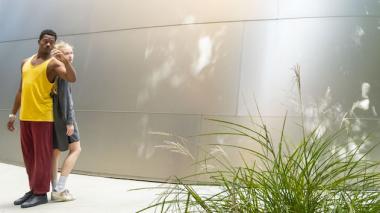 When architect Frank Gehry completed his plans for the Walt Disney Concert Hall, his design included a mechanism that could drop a portion of the stage to create an orchestra pit. For financial reasons the plan was never realized, though in a recent interview Gehry said it still could be done.

The absence of an orchestra pit has created a challenge ever since the hall opened in 2003, as directors have tried to come up with inventive ways to present more theatrically or dance oriented productions in the hall — from the Peter Sellars/Esa-Pekka Salonen/Bill Viola staging of Tristan and Isolde (in May, 2007) to Thursday’s performance of Sergei Prokofiev’s complete ballet, Romeo and Juliet, choreographed by Benjamin Millepied and conducted by Gustavo Dudamel.

The full force of the Philharmonic was compressed to the back of the stage below a large projection screen,creating a limited area downstage that could be used by 10 members of Millepied’s L.A. Dance Project. What Millepied (a former principal dancer with the New York City Ballet and creator of the choreography of the balletic nightmare in Black Swan) actually had in mind, however, turned out to be a good deal more inventive and technically challenging.

The dancers first appeared in the confrontational street scene in Act 1 that. Contemporary as can be, brightly clad and wearing tennis shoes, they made their entrance like they’d stepped out of a scene from La La Land. Happy-go-lucky, they worked their way across the stage in a rambunctious succession of angular arm thrusts, tossed heads, and comradely embraces.

It wasn’t until the Capulet’s Ball that Millepied began to reveal the uniqueness of his concept. As Romeo (David Adrian Freeland Jr.) entered and exited with his friends heading for the ball, their departure from the stage was instantly picked up by a live video camera that followed them backstage where they picked up their identity-concealing masks, the action projected on the screen above the orchestra.

As the scene evolved, the disguised Montagues encountered the Capulets and engaged with the revelers in a brightly lit, orange-tinted hallway. At this point, Romeo first saw Juliet (Janie Taylor). It also became clear that the voyeuristic eye of the camera (fluidly handled by Millepied himself) was as carefully choreographed as the dancers, moving in for screen-filling close-ups, swirling and gracefully backing away to reveal the entire ensemble’s pulsating gyrations.

But it was in the “balcony scene” pas de deux that Millepied’s concept truly flowered as the camera followed the love-struck duo out of the hall, along the highly reflective surfaces of Disney Hall and into the lush “moonlit” setting of the Terrace Garden.

As Dudamel led the orchestra, producing sweeping passages in the strings and twinkling effects in the winds and percussion, Freeland and Taylor explored the intimacy of their newfound mutual attraction. More classically balletic in its references, the scene became simultaneously elegant and intimate, as the camera closed in on the rapturous faces of the two dancers.

The first half of the ballet concluded with the camera interacting like a third combatant during the fight to the death between Romeo and Tybalt (Nathan B. Makolandra). First with fists, then with knives, it brought to mind Jerome Robbins’s “Rumble” scene from West Side Story, though the setting was a cabinet-lined hallway of the Philharmonic’s administrative offices.

Impressive though it was, Millepied’s choreography only illustrated a small portion of the ballet, leaving the majority of scenes entirely to Dudamel and the orchestra. Leaving the hall at intermission I heard more than one older patron complain about the length of the first half, while a bevy of young, would-be ballerinas seemed disappointed, having expected a more complete and classically oriented experience. There were quite a few empty seats after intermission.

The dovetailing of long orchestral passages with video-enhanced dance segments continued in the second half. The opening scene in Juliet’s bedchamber — one of Prokofiev’s masterpieces of orchestration and emotional coloration — was left entirely to the orchestra, reaching a level of symphonic grandeur few ballet companies could hope to achieve. During this extended scene, Dudamel brought out every touching detail of the star-crossed lover’s single night of marital bliss.

Like a master director, Millepied made the most of the ballet’s (and Shakespeare’s) tragic ending. As Romeo and his countrymen made their way to the Capulet’s crypt, they left the stage and descended into the gothic-like chamber of columns that support the Disney Hall stage. There, bathed in a single shaft of light, lay Juliet. And in one of the most tender and emotional scenes of the ballet, Freeland danced a pas de deux with the limp and lifeless body of his Juliet. He then bore her onto stage where he downed a fatal dose of pills only to be followed into death by the now awakened and gracefully distraught, Juliet.

Thursday’s performance represented the first time in its 100-year history that the Philharmonic has performed Prokofiev’s entire ballet. I’m glad I was there to hear it and see it. According the program notes, the performance represents the first iteration of a “forthcoming full-length experience” from Millepied and the L.A. Dance Project.