Have you had your coffee yet? If not, Warner Records’ Erato label has a nonaddictive alternative for you: 79 minutes of bracing tenor duets that have more high Cs than your brew has caffeine.

The singers on Rossini: Amici e Rivali are two of our generation’s foremost Rossini tenors, Lawrence Brownlee and Michael Spyres. Rarely will you mistake one for the other. Brownlee’s voice is a light-lyric (leggiero) tenor which fearlessly produces one fantastic full-volume flight into the stratosphere after the other. Spyres, who began his career as a baritone, has a classic bari-tenor instrument whose fundamental character shifts as he accelerates into his astounding high extension. There’s one low-lying passage amid the various scenes and arias on this disc that Spyres sings with such classic baritonal timbre that I was impelled to scroll once again through the online liner notes to search in vain for the name of the guest baritone that I’d somehow missed. 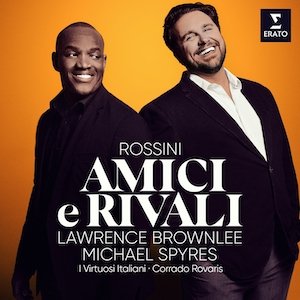 The blend between these two men, who sing roles in which they either vow friendship or express rivalry and animosity, is consistently attractive. Their voices are beautiful. They sound as perfect for each other and as perfectly interesting for us as the coupling of soprano Joan Sutherland with mezzo-soprano Marilyn Horne. You’ll search in vain through recorded history for two Rossini tenors who sing duets so compellingly. In fact, what you’ll usually encounter instead are tenors who were pressed into their respective roles for want of anyone else who could pull them off. The Age of the Mezzo that has brought us everyone from Cecilia Bartoli and Vesselina Kassarova to Joyce DiDonato and Isabel Leonard has now been joined by the Age of the Coloratura Tenor, in which Brownlee and Spyres join Juan Diego Flórez, Javier Camarena, and others.

Unless you’re a committed Rossini fan, the only duet on the recital that may be familiar will be the opener from Il barbiere di Siviglia, “All’idea di quel metallo” (At the idea of this metal), which is sung by Figaro and the Count. Given that neither of these men is a buffo specialist, and neither usually performs as a baritone (which was the voice expected by Rossini for Figaro), you won’t get expertly produced, preposterous patter. But what you’ll get instead is a far more genuine representation of the coloratura fireworks that Rossini expected.

The opener is also the only comic duet on the recital. All other scenes and arias, including ensembles that call for the addition of mezzo-soprano Tara Erraught and tenor Xabier Anduaga, are from Rossini’s heroic operas: Ricciardo e Zoraide, Otello, La donna del lago, Elisabetta, regina d’Inghilterra, Le Siége de Corinthe (a reworking of Maometto II, prepared for Paris), and Armida.

As spectacular as the singing is, listening to the entire recital in one sitting brought to mind constant dashes to commuter rail, the bus, or the ferry. So much of the vocal production is at top volume, and so much of it characterized by ceaseless cascades of notes that, when packed together like this, the music can be too much of a very good thing.

For those neither fluent in Italian nor adept at deciphering language as the singers’ voices change during their ascents, following along with the translations to grasp the meaning of every word may eventually become a tedious exercise in trying to find meaning in what is ultimately an athletic exercise.

Which is not to suggest that everyone on the recording is not a superb artist as well as a stellar vocal athlete. Erraught can sound a little old-fashioned at the bottom of her huge range, but the higher she sings, the more spectacular she sounds. I can’t say that I paid that much attention to Anduaga, which is another way of saying that he blended in perfectly with Brownlee and Spyres. I just wish that more of these bracing excerpts touched the heart as strongly as they stir the gut.

The international star tenor reflects on his career so far and the highlights to come.

Lawrence Brownlee Is Transcendent in Cycles of My Being

The tenor is a perfect match for Tyshawn Sorey's song cycle about the experiences and aspirations of black men in America.

A Lad’s Love and More From Brian Giebler

English songs of longing and loss find a perfect voice in the gifted tenor on this new disc.