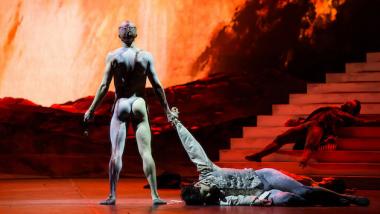 Liam Scarlett’s Frankenstein, which the Royal Ballet unveiled recently at the Royal Opera House, Covent Garden, needs a thorough overhaul before it takes the stage next year at San Francisco Ballet, its co-producer.

Despite its flashy visual effects, it’s conceptually drab, unfocused, and though ably danced by the marvelous company that is the Royal Ballet, choreographically surprisingly banal, considering Scarlett’s triumphs. His most recent work for San Francisco Ballet, Fearful Symmetries, is superb.

You can sympathize with the immensity of Scarlett’s task: to bring to fruition a ballet that lives up to the imaginations and expectations of generations of readers and moviegoers — thanks to Mary Shelley, Boris Karloff and yes, Mel Brooks. And a full-length work (Scarlett’s first), with attendant staging, storytelling, and budgetary considerations is an entirely different kettle of fish than a 20-minute ballet.

In case you missed reading or seeing it, Victor Frankenstein (Federico Bonelli) is a student at university who, in the wake of his beloved mother’s death, hopes to discover a way to reanimate dead matter. (Note: Frankenstein is the creator of the monster; he is not the monster. The monster is called the Creature.) Here the Creature (Steven McRae) is writ not large, but huge. He is hideously well-muscled; he’s wearing a skin of tights with veins and blood and bulging things (don’t ask). All this is amplified by lightning (it was, after all, a time of interest in galvanism), strobes, and filmic effects.

American composer Lowell Liebermann’s score, played by the Orchestra of the Royal Opera House and conducted this night by Koen Kessels, sounds for the most part like competent fright-soundtrack fare with a little imitativeness thrown in. Liebermann says in the program notes that he has no problem emulating ballet composers like Prokofiev, whom he much admires. To these ears that’s a little too much emulation/admiration — on the order of Romeo and Juliet and Cinderella.

Having made the Creature, Frankenstein rejects it for its hideousness, sparking in the Creature first a desire for Victor’s love, as he crawls all over him; then, failing that, for a partner to love (Victor refuses to make for him a Creature-spouse, and it’s not so surprising). Like the rest of the ballet, these characterizations lack complexity. Victor Frankenstein comes off as cold-blooded, self-centered, and distracted; the Creature as neurotic and bathetic.

However, there are a couple of seconds when the Creature is scary indeed, especially when he vengefully murders Victor’s 7-year-old brother. Somehow the Creature manages to hide in plain sight and surprise the little boy. Like so much else on display, it strains credulity that the child and his devoted nursemaid didn’t know of his presence, since he’s crouched behind a few barren twigs in the front yard. When he grabs little Henry, it’s truly creepy. The Creature plants a locket of Henry’s on the nursemaid, who is executed for the murder.

Eventually he kills Frankenstein’s bride Elizabeth, whereupon Frankenstein kills himself, the Creature regrets all as the flames rise around him, and he’s destroyed.

Well. With so much loss, it would be marvelous to feel something for the characters caught up in it. But it isn’t to be. It feels simply like inevitable destruction, the climax, if you can call it that, of two acts’ worth of limp ensemble dancing at parties, feasts, and the like, broken up by ineffectual pas de deux and feckless mime.

There’s one moment, and only one, where we glimpse what Frankenstein could have been, given Scarlett’s abilities as a dance maker.  As he fights for the final time with Victor Frankenstein, McRae’s Creature finally has a superb, fiery moment of visceral outrage, fully discharged via the leaps and the torsion of his body. The audience is, for only a moment, thunderstruck.