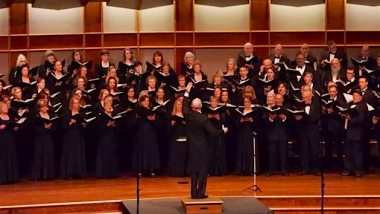 How does a composer of the last century even begin to approach a genre as old as music history itself? The Christian Mass is so ubiquitous in music history that 20th-century composers embraced an eclectic array of styles to contribute to that tradition while trying to say something new.

Saturday evening’s performance by the Sacramento Choral Society and Orchestra, led by Music Director Donald Kendrick, stretched the ears of a full house in Sacramento’s Fremont Presbyterian Church with a rare opportunity to hear diverse and challenging sacred music in the society’s annual Stained Glass concert.

It would be easy to dismiss their performance of Arvo Pärt’s Berliner Messe as underwhelming and plain, but that misses the essence of this piece. Pärt’s choral music presents an atypical challenge. The bell-like quality of the tintinnabuli technique that Pärt imbues in several of his pieces brings an almost mystical quality to the choir. This style is not particularly easy to pull off, as voices are easily lost in the complex texture and the overall effect can quickly fall flat. However, the chorus exhibited beautiful restraint so that I listened intently in anticipation and excitement. The clarity of the tintinnabuli style imbued the Mass text with a haunting and alluring quality. The choir enlivened the subtle nuances throughout, paying especially close attention to diction. Several times Kendrick urged the choir to give more, and the extra energy was immediately apparent.

Soprano Patricia Westley was a highlight of the evening. She sang several solos in both the Pärt and Mozart’s Litaniae de venerabili altaris Sacramento, (Litany of the venerable sacrament of the altar) K. 243, effortlessly, exercising control and clarity in the note-heavy passages and showing exceptional virtuosity in the lyrical moments. Her expressiveness was well-received by the audience and, judging by her own reaction, she knew it as well.

The choir pivoted on their generally subdued performance in the finale, as Zoltan Kodaly’s Laudes Organi (In praise of organs) allowed them to fill the entire hall with their gorgeous blend and vibrant sound. And how could one forget the organ, especially in this piece? Organist Ryan Enright was flawless the entire evening and this selection perfectly highlighted his skill and musicality. He navigated the frequent timbral shifts with ease and he consistently matched the volume of the choir — a tall order in any setting.

This was an ambitious and the SCSO handled it remarkably well. The remainder of the season includes some exciting repertoire and if tonight’s performance is an indication of the quality of those performances, you will certainly not want to miss them.