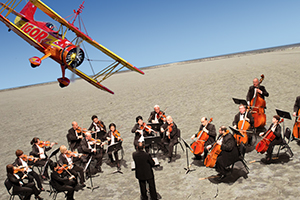 With so many shouters in the arts scrambling for recognition, it’s a relief to experience a composer following Charles Spurgeon’s dictum that quietude “is as a palace of cedars to the wise.” Samuel Adams’ surprising new violin concerto premiered by the Berkeley Symphony Thursday night has some great passages for testing hearing aids, but it is far more than that. As realized by Music Director Joana Carneiro and soloist Anthony Marwood, the work challenges traditional concerto expectations and reveals a creator with a decidedly original voice.

Before expanding on Adams’ achievement, let me remark on the rest of the concert. It began with a courageous choice: Stravinsky’s 1949 Pulcinella Suite. For less than uppermost-tier orchestras, however, it might as well be the “Booby-Trap” suite: Stravinsky’s transparent transformation of ditties by Pergolesi and his sound-alikes, like the famous scene from Hitchcock’s North by Northwest, leaves no room for players to hide. Numerous errors of synchronicity, balance, and intonation were compensated by some fine solos in the suite’s Serenata and Minuetto, but the result could not be made whole by the nicety of only some of its parts.

Mendelssohn’s “Scottish” symphony concluded the program after an intermission. An adequate performance, for the most part. Carneiro took another risk with her orchestra in taking the scherzo at quite a brisk pace. Not everyone could keep up with the chase, but it was fun nevertheless.

Much better news to report: For the first time in many concerts I have heard here, the Zellerbach acoustics were acceptable. Moving the players to the very, very edge of the stage kept the rear of the orchestra away from the black hole of the rafters, much to the benefit of a balanced sound. Congratulations to all for this solution. Will it still be possible for a Mahler-sized ensemble?

This is the image that comes to mind in characterizing Adams’ concerto: Imagine the soloist as a hot-air balloon rider. Drifting along, up and down he goes, fairly silently. The many ascents and descents are considerably varied, stepwise melodic lines from the instrument. Hardly any extended techniques are employed. There is little abrasion, just a simple but absorbing panoply of melismas.

The orchestra is the atmosphere and ground. Only rarely does it present promontories or obstacles, but its surface terrain is fascinatingly textured and ever changing. The balloonist is always there; only once in the 30-minute work was the orchestra on its own for any length of time. Yet the orchestra is not a slavish accompanist. It provides a cornucopia of “breezes” wafting the balloon along: mysterious mists; elements of distant jazz memories; transparent harmonies; sweet and soft pillows should the balloonist care to land; more ominously, occasional breaths from the grave. Many of the breezes are of the most delicate nature, pufflets, gas leaks.

Throughout, the Berkeley Symphony and Marwood presented the strongest case for the concerto. Marwood’s tone was as smooth as the summer of his flight. The orchestra members were superbly coached by Carneiro down to the faintest pianissimo. There were four movements, but little distinguished one from another due to the predominate mood in each as described above. A short break was taken between the second and third movements. At the conclusion, there was widespread applause, some cheers, and about a 25% standing ovation.

During intermission, only a very few of the dozens of patrons I spoke did not like Adams’ work. Most would be happy to hear it again. Some felt it fit for meditation; others felt a slight anxiety, as if something were “about to happen” but never did. One reported it sounded “extraterrestrial.” A couple thought of it as a fine background to a yet-to-be-filmed movie.

For myself, I was completely absorbed with the music. Only during the third movement section titled “patiently waiting for the past to come” did I become impatient hearing too much of the melisma thing. Perhaps a five-minute cut should be considered somewhere. But in any case, I expect Samuel Adams’ career balloon will continue to rise. May it eventually land on the Pulitzer headquarters in St. Louis!