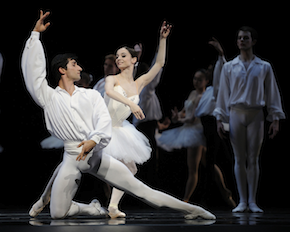 As it began its repertory season, San Francisco Ballet offered a program showing everything that makes it a treasure. Tuesday’s performance opened with the company premiere of Serge Lifar’s Suite en Blanc, a grand-scale, white-tulle storm of classical perfection, created in 1943 for the Paris Opera Ballet and set to Lalo. Next came In the Night, set to Chopin piano music, Jerome Robbins’ intimate ballet for three couples in various states of amatory bliss and distress.

And finally, last but volubly and visibly far from least, there was British choreographer Wayne McGregor’s Borderlands, his first commission for the company. Performed by a dozen dancers, of all ranks, it’s stunning, the kind of ballet that makes you want to see again, immediately, because on first viewing the moves are so demanding, so intricate, as to seem impossible to replicate.

It has electronic music by Joel Cadbury and Paul Stoney, but rarely do the dancers seem to be moving to it. It’s laid down like carpet tacks, tortured and torturing, with static that makes Thom Willems, whose work for choreographer William Forsythe is in a similar vein, sound like a pussycat. Allegedly, each music section takes four minutes. They fly by like hours. Meanwhile, though, there’s insanely compelling dancing.

The company has McGregor’s Eden/Eden and Chroma in the repertory. McGregor is an associate choreographer at England’s Royal Ballet, despite his credentials as a modern dance guy with his own company, Random Dance. Borderlands speaks to that modern preoccupation even as it makes use of pointework and classical vocabulary, sometimes rendered by the book, with great suppleness and fluidity, and at other times epically distorted.

The piece draws inspiration from painter Josef Albers, whose Bauhaus-inspired paintings of geometric shapes and calm yet vibrant color washes are alluded to in Lucy Carter’s lighting — which uses LEDs — and décor. Squares suggesting canvases hang from the flies; the stage space indicates a gallery, and its colors change from shades of pale gray and blue to deep eggplant. The dancers’ neutral-colored garb — dance trunks and shirts — takes on the coloration of the space.

Borderlands partnering all but defies description. The women are lifted and tossed with dangerous vigor. Awoman is whirled and snapped around the shoulders of her partner, then pushed out to his side before, somehow, winding up between his feet. This move has a geometric, toothlike quality: all points and sharp edges. Often, though, after such a maneuver, the dancers do something more balletically conventional except for the warp speed, such as a string of chaine turns, or violent tendus, one toe raking the ground. Then we’re back to jutting hips, involuted legs, twists of the spine, arabesques beyond 180 degrees. Toward the end, a foursome faces us and the two dancers in the middle raise their eyes to the light in a rare suggestion that, just maybe, human vulnerability outstrips kinetic inevitability.

Among the superb dancers was Maria Kochetkova, whose versatility was underscored in her lovely rendition of the “Flute” section of the classical Suite en Blanc. I had the pleasure of seeing the Paris Opera Ballet production last summer. It was precise and stunning.

However, because of Kochetkova and so many others Tuesday night, the San Francisco Ballet’s take on it, as staged by Maina Gielgud, makes this large-company work more radiant, more juicy. Perhaps the lighting, by Ronald Bates, had something to do with it. The whites of the costumes are extremely bright, the black of the backdrop extremely black. The dancers perform on two levels, the top one a walkway above the stage that makes the artists appear to float.

Lorena Feijoo and Pierre-Francois Vilanoba took the prize for drama as well as attack.

It’s a wonderful, almost dreamlike frame for a parade of pas de trois, solos, pas de deux, and corps work to exquisite music, conducted here by Martin West. Yuan Yuan Tan and her partner, Vito Mazzeo, made a little symphony out of their pas de deux, which included gorgeous, deep-swooping penches. In the pas de trois, Vanessa Zahorian whipped off a riveting stream of fouettes. Davit Karapetyan’s mazurka was beautifully nuanced. The balance of calm and energy was underscored by the unity of the corps de ballet, 20 strong. Artistic Director Helgi Tomasson has made a superb addition to the repertory.

In the Night was fresh and alive. Vanessa Zahorian and her partner, Ruben Martin, dazzled as the perfect couple in lively love. Sofiane Sylve and Tiit Helimets conveyed a more settled aura, warm and gracious. And Lorena Feijoo, battling with her partner, Pierre-Francois Vilanoba, as they drove each other toward mutual surrender, took the prize for drama as well as attack. Roy Bogas was the terrific pianist.