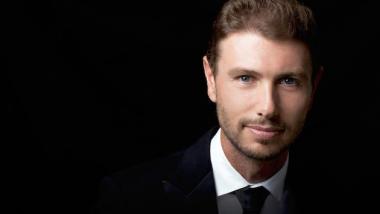 Antlers are typical headgear during the holiday season, but the ushers and one bassist at the Santa Rosa Symphony concert on Dec. 2 sported apples atop their heads. The red fruits were festive but perplexing until the orchestra began Rossini’s “William Tell” overture, at which point even the dull-witted reviewer made the connection.

Instead of having Tell stride on stage and shoot the apple off his son’s head, the orchestra offered a bull’s-eye performance that split the overture right down the middle. Audiences of a certain age are accustomed to hearing only the latter part of the piece, where the Lone Ranger gallops across the screen shouting “Hi ho, Silver,” but there’s much more to it than that.

Principal cellist Adelle-Akika Kearns opened with a beautifully played solo, accompanied at times by four of her cello colleagues. Her tone was gorgeous, her vibrato smooth, and her long trills outstanding. Next came solid work from the trombones, a lovely flute and English horn duet, and the heraldic trumpet entry that brings on the Lone Ranger. Guest conductor Jayce Ogren set a furious pace but proved adept at controlling dynamics and eliciting meticulous playing despite all the frenzy. Boisterous applause followed the rousing performance.

So far so good, but then the Swiss legend gave way to an English melancholic of far less heroic proportions. Berlioz’s Harold in Italy, based on Lord Byron’s semi-autobiographical poem “Childe Harold,” is a symphony masquerading as a concerto. The viola, ably played here by Nokuthula Ngwenyama, takes on the role of Harold observing various Italian tableaux. While the viola part is sometimes of interest, it is nowhere near as virtuosic or impassioned as true viola concertos by Bartok, Walton, and other modern composers.

Ngwenyama spent most of her time playing long notes or arpeggios, with very few dazzling runs or assertive solos. She also hampered her stage presence by playing from a computerized score, which she kept advancing with a foot pedal. In addition, Berlioz’s awkward orchestration often had her doubling lines played by other orchestral sections, particularly the French horns. Her strings vibrated and her bow moved, but the horns drowned her out.

The viola is relatively prominent in the first two movements, but it begins to fade out in the third, deferring to the English horn for a prominent solo. By the fourth movement, the viola plays almost nothing except for a brief passage near the end, all of which entails a considerable amount of standing around.

Perhaps a better way to perform Harold in Italy would be to place the soloist in the principal viola spot inside the orchestra. The soloist would still be the main character, but only within a larger context that hides the long stretches of viola silence.

The soloists in Vivaldi’s Gloria also did a fair amount of sitting around, but that is de rigueur in works for orchestra, chorus, and soloists. In a gesture to Baroque performance practice, the orchestra was reduced to 30 players, all but four of them strings. (The non-strings were a trumpet, an oboe, a bassoon, and a small organ.) In contrast, the chorus remained at full strength, with about 70 singers from Sonoma State and Santa Rosa Junior College arrayed on the stage behind the orchestra.

The numbers worked to the choir’s advantage, allowing them to be heard clearly at all times. They enhanced their clarity by careful enunciation of the Latin text and by blending well as a group. The bass, tenor, alto and soprano sections were evenly balanced, and nobody stuck out.

The choir’s singing in the opening “Gloria in excelsis Deo” was sprightly and vivacious, and their performance of the subsequent “Et in terra pax” was restful and calm. Ogren did an admirable job of balancing the singers and the instrumentalists, offering clear signals and expressive hand gestures.

The solos began with a wonderful rendition of the “Laudamus te” soprano duet by Sonoma State alumnae Jennifer Thuman and Esther Rayo. Their voices were radiant, and they projected well in the large space. After another chorus, Thuman followed up with a sublime “Domine Deus” displaying a well-controlled vibrato and solid trills. The final soloist, mezzo-soprano Chris Fritzche, also impressed in another “Domine Deus” and the penultimate “Qui sedes.”

The chorus had the last word with a rousing “Quoniam tu solus sanctus,” leading to an emphatic and life-affirming “Amen.” The applause was long and loud.

Music from West Side Story is the standout in this lively, dance-themed program.