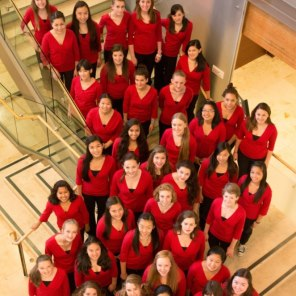 Santos: The Powers That She

If there was a higher power guiding the genesis of Gabriela Lena Frank’s latest composition, it must have been some kind of Mother Goddess who brought it all together, because the divine feminine energy of the oratorio Santos, which had its world premiere last weekend at the Mission Dolores Basilica in San Francisco, was overwhelming.

The two-part oratorio was commissioned by the San Francisco Girls Chorus, where Frank is currently composer-in-residence, in partnership with the Berkeley Symphony Orchestra, which premiered the first part last season.

The project originated in the mind of soprano Jessica Rivera, who suggested it to Music Director Joana Carneiro, who, in turn, brought her friend and ‘artistic sister’, composer Gabriela Lena Frank into the mix. When Rivera and Frank met, they immediately realized that they too were kindred spirits (read article), and a forceful and creative conductor-composer-performer ‘triumfeminate’ was born.

The first part of the oratorio, subtitled “Holy Sisters”, is inspired by a number of strong women from the Bible (Mary Magdalene, Rachel, Sarah, Miriam and Hannah) and their relationship to God.

The text, assembled by Tolentino de Mendonça, draws from Biblical passages such as the Song of Solomon and the story of the Annunciation, whereas the second part, “Santos” (written by Cruz), describes a female protagonist who sculpts saints out of stone and wood and experiences a religious crisis.

Even though the dramatic connection between the two movements may not immediately be obvious — absorbing the deeper meaning of the libretto would require more than a single performance — Frank’s music speaks volumes. Her style is accessible and imaginative and the long and powerful vocal lines she spins are always respectful of the natural flow of the language.

Frank’s music speaks volumes … and the long and powerful vocal lines she spins are always respectful of the natural flow of the language.

Not to diminish Frank’s ability to write for vocal soloists and chorus, but her handling of the orchestra is exceptional. The score shows shades of Debussy, Stravinsky, and Brahms, and towards the end of “Holy Sisters,” where Frank inserted a song that she wrote as a wedding gift for Carneiro, the atmosphere changes within a few bars from glory to mystery as she creates musical vistas that Gustav Mahler would likely have approved of.

Some of Frank’s musical themes are only three or four notes long (as in the opening of “Holy Sisters”) but she uses these riffs to anchor the structure of the composition. On top of this, she builds a lush and colorful orchestral backdrop for the flowing melodies she draws for the musical exchange between the strong voices of Rivera and mezzo-soprano Rachel Calloway (the Saint Maker in “Santos”) with their incredible vocal range, and the bright, silvery voices of the Girls Chorus, superbly prepared by Interim Music Director Brandon Brack.

The oratorio’s second part, “Santos,” is more tempestuous than “Holy Sisters.” It incorporates stronger emotions and is at times more stormy dialogue than music, especially in the part where Saint (Rivera) and Saint Maker (Calloway) utter comments back and forth.

The San Francisco Girls Chorus sounded magnificent … and the musicians of the BSO followed Carneiro’s lead with intense and passionate feeling.

Frank creates some sharply dissonant fortissimo that are quite powerful and even unpleasant to the ears, but once the Saint Maker overcomes her spiritual crisis and reconciles with the Lord, the music slowly disappears in whispering voices, a fading violin, and the waning echo of a tubular bell.

The San Francisco Girls Chorus sounded magnificent, delicately positioning itself between orchestra and soloists, taking an active part in the musical dialogue. The girls alternately commented on the proceedings, functioned as the omniscient narrator, or simply added extra color to the orchestra. As conductor, Carneiro found and capitalized on every subtle nuance in the orchestral score and the musicians of the BSO followed her lead with intense and passionate feeling.

It’s too bad that the world premiere of Santos was also its only performance. It deserves to be heard.