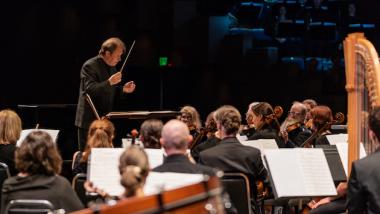 Everyone seemed to love Become Ocean, the roiling work by John Luther Adams that won both Pulitzer and Grammy awards. How fans manage their expectations of similarity, then, largely determines their experience of Adams’s new sequel, Become Desert, which the Seattle Symphony (conducted by Ludovic Morlot) played at Zellerbach Hall on Saturday.

But these two geographical features as evoked in music can and should sound different. Here, Adams’s desert is calm and unshowy, its slowly unfolding arc — the notes start high, go low, and come up again — predictable. A sense of fulfillment is practically built in.

The dawn comes with chimes and glassy harmonics, thin and almost indistinctly high. After a time, the harps come in, plucking every so often and, very slowly, the texture grows richer. Solid notes feel newly substantial: meaty and earthy. The music becomes grounded.

Muted trumpets and horns are playing, I realize — their initial entrances apparently hadn’t popped out. It’s the same with the voices (Volti Chorus, directed by Robert Geary). Some timbres are more resonant here and there, but the mass isn’t divisible. Though notes change, a ruling consonance creates the effect of one long tone, a swell (of sand?) that never entirely recedes.

This kind of slowly turning music isn’t new to the Bay Area, but it’s unusual territory for a big-budget orchestral commission. Drone minimalism and unhurried process music are played here almost exclusively by chamber ensembles or soloists, at small venues like the Center for New Music. Even the quiet of Become Desert, then, is uniquely large in scale; the sheer size of the orchestra (which includes eight horns, necessitating extra players) creates a powerfully immersive effect.

One by one, the trumpets drop out, along with the violins. Timpani rolls and male voices deepen the pitch material, and if prolonged sameness had earlier reminded me of the Prelude to Das Rheingold, here, the gloriously thick E-flat major of the low brass hammered it home. But not for long: as soon as the music bottoms out, the notes climb again. A kind of “Farewell" Symphony begins: the low brass leaves, taking sharps and flats with them, and the harps’ rising fifths return the music to its high perch.

There’s novelty especially in the orchestral writing, which is about as far from idiomatic as the range is wide. The long tones brass players would use to warm up for their big fanfares in a romantic symphony are here the main event, and the violins move no faster than the cellos. Within sections, bow changes are coordinated — but we hardly if ever hear them, with motion overlapping at different rates. Perfect togetherness isn’t a concern, and with the players separated into five distinct groups across the space, all the sounds pan. The largest cohort is onstage, but the sections sit in reverse: the concertmaster tunes as normal, then goes to sit in the back. Writers have described Adams’s recurring subject of nature as inherently political — in Become Desert, it’s his nonhierarchical usage of the orchestra that feels relevant.

Traditional as it is, Sibelius’s Symphony No. 2 has its own egalitarianism. Everyone shares the grunt work of the scales, and often, instruments historically in supportive roles, like the double bass (a section that consistently shined on Saturday, especially in the Andante’s pizzicato), are the most important.

It was a remarkably loose performance from some other sections, which moved without particular uniformity — something that may have contributed to a few hairy moments in the accelerating passages, whose moving parts make it difficult to sound smooth. But there was never a dull moment, and it’s hard to imagine a better complement to the Adams than this lively performance.

The Seattle Symphony Wades Into the Unfathomable Ocean

Works by Sibelius, Britten, and John Luther Adams celebrate the mysterious power of the sea.