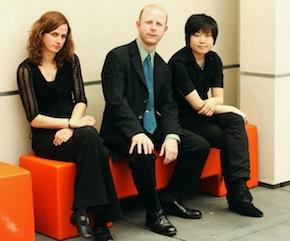 In its Friday recital at Old First Concerts, the Delphi Trio sought, and often found, convincing readings of three composers’ distinctive takes on the idiom of the piano trio: those of Mozart, Ravel, and Brahms. The ensemble proved the truism that, in a trio, alliances shift unpredictably even as power struggles surface and play themselves out in cascades of passagework or the sheer volume of a Steinway grand.

The pianist and violinist, each accustomed to leadership roles in chamber music, must discover ways to share the responsibility of leadership within the particular confines of the genre. At the same time, the cello and violin — instrumental siblings — find themselves naturally allied with each other against the alien, percussive musicality of the keyboard. This is perhaps the central dramatic tension of the form: the piano, so often cast as an accompanist when paired with strings in the Classical tradition, now becomes the center of the ensemble, a behemoth flanked by lithe and sometimes disobedient minions.

The Delphi Trio — consisting of Liana Bérubé, violin; Michelle Kwon, cello; and Jeffrey LaDeur, piano — explored these dynamics in an energetic and polished performance of three masterpieces of the genre: Mozart’s Trio No. 6 in C Major, K. 548; Ravel’s Trio in A Minor; and Brahms’ B-Major Trio No. 8. LaDeur’s articulate, expressive work at the keyboard was matched by spot-on ensemble playing and a beautifully blended sound from the strings.

Expressive work at the keyboard was matched by spot-on ensemble playing and a beautifully blended sound from the strings.

The members of the youthful trio met while at the San Francisco Conservatory, and all three are not only well-established in the Bay Area (Bérubé and Kwon are section leaders in numerous local orchestras) but also rising stars in the U.S. and abroad.

Ravel’s epic, virtuosic trio, completed just before he went off to serve as an ambulance driver in the first World War, received a treatment Friday that was sensitive to both its cinematic scope and its arresting moments of quiet, intimate stasis. Of the three composers, Ravel seems to have been most concerned with developing strategies to create a musical gestalt, a sonic unity of the three instruments. Rather than embracing the Classical and Romantic ideals of chamber music as a conversation among a group of distinct individuals (a notion closely connected to chamber music’s origin as a social pastime for amateur musicians), Ravel blends the instruments to create vibrant colors and constantly shifting textures. The Delphi players brought to his masterpiece an impressive dynamic variety, from cataclysmic keyboard fortissimos (accompanied by frenetic bursts of string arpeggios) to ethereal pastel mists singed by softly sustained harmonics.

After hearing the Ravel, which wisely was programmed as the final piece before intermission, I wished that the Mozart trio, which opened the program, had benefitted from more of the same timbral and dynamic sensitivity. Mozart, of course, conceived his trio for a much smaller and lighter instrument than the nine-foot Steinway “L” house piano at Old First Church. On a Mozart-era instrument, the pianist can enjoy the exuberance of the C-major trio’s opening Allegro without overbalancing the tenor strains of the cello. The Delphi Trio chose energy and panache over equal audibility of the instruments in a number of places in Mozart’s outer movements, a choice that may have been in keeping with the playful and operatic intentions of his style.

The program’s final work, Brahm’s forthright though somewhat longwinded four-movement trio in B major, brought the evening’s focus back to the keyboard. Brahms, famously vain as a pianist, composed a work that most clearly exhibited the paradigm of the piano trio as a keyboard sonata accompanied by strings. LaDeur’s assured virtuosity was complemented by first-rate string playing (despite a couple of uncharacteristic out-of-tune final chords), completing a program that displayed the particular richness and variety of the piano trio.

A Window Into Music of California Missions