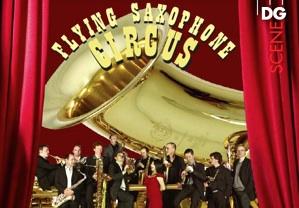 What if you were confronted with a dozen spirited saxophonists, male and female, embracing a stunning range of pitch and a delightful variety of repertoire? That wouldn’t be too much sax, would it? Not in the case of the Selmer Saxharmonic, a talented ensemble of German reed virtuosos, who for an hour may tempt you to cheat on your long-term relationship with the orchestra and its familiar strings, horns, and percussion.

Shostokovich’s Jazz Suite No. 2, as arranged by tenor player Christoph Enzel, makes for a seductive start to this affair, with its several sections mixing tristesse with tickle, to which the aggregation of reeds seems ideally suited. In other sections, the Russian composer marshals a couple of neo-Sousa marches, for which the sax array — bass, baritone, tenor, alto, soprano, and even sopranino — brightly covers all the tonal elements. Two waltzes are particularly good showpieces for conductor Milan Turković’s mastery of pace and other dynamics, the second of these reminding filmgoers of its haunting deployment in the soundtrack to Stanley Kubrick’s swan song, Eyes Wide Shut. Some of what enables these players to cover so many orchestral bases is evident in the special techniques deployed in the “Little Polka” section and elsewhere, including slap-and-flutter-tonguing, key clicks, and vibrato manipulation.


Changing genres as if they were costumes, the Selmers take on the affect of a village band during Enzel’s setting of three of Dvořák’s Slavonic Dances. The saxes seem specially apt at managing the Slavic sway between mystery and felicity in the No. 7 “Skocna,” with the lower instruments rumbling like bassoons, the higher chirping like birds. Darius Milhaud’s Scaramouche, the third of Enzel’s arrangements, has its characteristic airiness and lightheartedness well-served, including the regional “Brasileira” section, evoking the composer’s Le Boeuf sur le toit. The Selmers become a charming dance band during a suite of Gershwin hit tunes, titled (perhaps by arranger J.-M. Londeix) American Stories, in which the reeds seem to take “The Man I Love” on a Kurt Weillish turn and to blow helium into a heady version of “I Got Rhythm.”

Whatever the oddity and amusement you find in this sort of ensemble and its arrangements, it never seems like a burlesque act — never anything less than fine art, fancifully and virtuosically presented. The Devil’s Rag for 12 Saxophones, which I assume was written for the Selmers by the still-living Jean Matita (aka Christian Lauba), certifies their mettle in a retro and wild farewell to this fine affair.