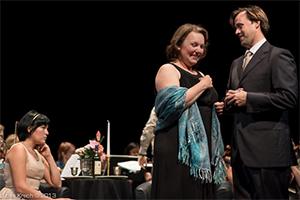 West Edge Opera’s production of Vanessa was a tour of a creaky Victorian mansion where only a few rooms have been partially restored to the glories imagined by its builders. Yet I was grateful to be let inside, and only wished the docents had dressed more appropriately for their living history.

Gian Carlo Menotti’s libretto locks Chekhovian characters in gothic-novel strictures and gives them occasional lines from bodice-rippers like “I want his love so my love will stay aflame.” But Samuel Barber’s music thrives in the story’s aristocratic formalities, achieving a satisfying balance between passionate lyricism versus structural and temporal restraint.

The action is set in the country estate of a Baroness, somewhere in northern Europe. Barber was inspired to the locale by a visit to a manor in Copenhagen, but the characters would seem to be more at home somewhere in an Igmar Bergman Swedish winter. The Baroness won’t speak to her daughter Vanessa, who has withdrawn into solitude for 20 years waiting for her lover Anatol to return. Anatol’s son shows up instead, claiming the same name.

Though his supposed charms are only hinted at in the wisely terse libretto, Anatol II manages to seduce Vanessa’s niece Erika in five minutes and make Vanessa his slave shortly thereafter. A few months later, Erika aborts her child by Anatol II by running out into the snow(??), Vanessa, now married to Anatol the troller, is about to escape to an extravagant but predictably unhappy life in Paris, and the Baroness decides to add Erika to her unspeakable list.

Barber's music bring them to vibrancy, and this it does with aplomb, especially in four set pieces

The New York Times critic Anthony Tommasini dubbed Samuel Barber’s’ opera “an authentic American masterpiece” after hearing a New York City Opera revival six years ago, but it wasn’t for the plot. The music is not responsible for the stock gothic atmosphere and weakly justified obsessions in the libretto. Its job is to bring them to vibrancy, and this it does with aplomb, especially in four set pieces: Ericka’s aria “Must the winter come so soon” in Act 1, the Doctor’s “Under the willow tree” dance in Act 2, Vanessa’s and Anatol’s duet “Love has a bitter core” in Act 3, and the concluding quintet “To leave, to break … .”

Conductor Jonathan Khuner wisely concentrated on the set pieces for the four orchestral rehearsals, and they came off well. The rest of the music had it ragged moments. As one string player told me, “Richard Strauss looks easy after this!” Soprano Marie Plette took a while to warm up before she stayed on key, but performed well through the bulk of the opera as Vanessa. Mezzo Nikola Printz did a fine job vocally as Erika. Both tenor Jonathan Boyd as Anatol and bass-baritone Phillip Skinner as the alcoholic Doctor were outstanding in their roles, and Malin Fritz as the Old Baroness was appropriately stern the relatively few times Barber allowed her to sing.

The biggest issue with the production was the semi-staging, in part due to the company’s use of the Berkeley Rep as a temporary venue. The 31 orchestra players took up 80% of the stage, leaving a postage stamp for the singers, greatly restricting their movements. There’s not much action in the opera anyway, so this was not a serious drawback. But 31 players is not a full orchestra, so much of the lush, almost early Schoenbergian sound is lost in this reduced version. Some chamber immediacy is a compensation, however, during the best-rehearsed sections.

Semi-staging decisions also extended to the costumes, which impressed me as anachronistic afterthoughts. Mentioned in the program but not projected with the surtitles is that the action takes place around 1905. Stiff collars and high-necked blouses would have been more appropriate for the constrained mindsets of the characters, not 1950s-plus-era clothes. I think the production would have also benefitted from some projections of photos of varying views of a Victorian estate and wintery environs to better convey the setting.

However, I in no way longed for the fancy interiors that might have gone with a full production. To be true to the perverse story, they would have had to include thick spider webs that enclosed the characters with the strength of chains.