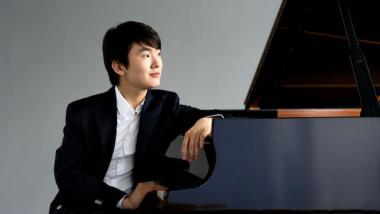 Many careers have been launched when an upcoming musician fills in for a major artist who falls ill or otherwise cancels an important engagement. André Watts’s career got a well-known boost when he substituted for Glenn Gould in a performance with New York Philharmonic in 1963, for example. When Lang Lang cancelled an entire season’s worth of concerts last autumn due to an injury in his arm, Berlin Philharmonic tapped Yuja Wang and Seong-Jin Cho for its extensive tour in Asia.

It’s not that Seong-Jin Cho needed such an engagement to push him into the limelight, however. Winner of the 2015 International Chopin Piano Competition and other important competitions such as the Hamamatsu, Cho had already found international fame, if not notoriety, at the age of 14.

In short, Cho is among the, consummate artists performing today, destined to be among the pantheon of legends, even if he just celebrated his 24th birthday at the sold-out recital at the California Theatre in San Jose, on Memorial Day.

Cho covered a wide gamut of styles, from the Beethoven “Pathetique” Sonata through the Chopin Sonata in B Minor, Schumann’s Fantasiestücke, then Debussy’s Images II, spanning just over a century in the evolution of piano music. In each of the pieces, Cho adapted to the different palettes required and he played every note with such conviction that nothing was ambiguous or left to chance. The result was a complete experience of the most important part of the history of piano music, which hypnotized the audience.

How in the world did he do it?

Perhaps it was his uncanny ability to balance the quiet, lyrical line against the backdrop, as heard in the opening of the Schumann Fantasiestücke, Op.12. The melody that begins as a descending scale floated like a cloud in the sky, not indistinctly nebulous, but with clear outlines. The second movement of the Beethoven Sonata possessed a similar quality, with the melody warmly distinct, but never separate or apart from the accompanying backdrop.

Or maybe it’s the drama he created through contrasts. The bipolar nervousness and volatility of “Aufschwung” (Soaring) and “In der Nacht” (In the night) offered internal contrasts and stood in sharp relief against the the musical laughs in “Grillen,” and the inconclusive answers in “Warum?” The extreme characteristics of the works were illustrated with clarity and humor.

It could also be his exquisite elasticity of time. Under Cho’s hands, time and space seemed to become a continuum, where generous but never excessive rubato created expansive space for reflections; every phrase breathed and sighed. Cho took the tempi in the first movement of the Beethoven Sonata to extremes, however, with the 16th-notes pulsating heavily in the Grave introduction, then the same pulse carrying the quarter notes in the Allegro molto section. The contrast was perhaps twice as great as typically heard in other performances, but the effect was utterly convincing.

Cho possesses an acute sense of colors, or harmonics, to illustrate different moods, characters, and emotions. This was particularly evident in the vibrantly imaginative reading of Debussy’s Images II. Different lines and layers were painted with distinct colors and touches, but never vaguely or indistinctly. The capriciousness of “Poissons d’Or” (Goldfish) and the exotic colors in “Et la lune descend sur le temple qui fut” (And the moon descends on the temple that was) were painted boldly.

Debussy is said to have stated that “music is the space between the notes” and Cho showed us what that means in the way he manipulated silence. In the first encore piece, “Träumerei” (Dreaming) from Kinderszenen (Scenes from childhood) by Schumann, the climactic moment was preceded by a brief silence, anticipating the quietly ecstatic G9 chord. When the chord arrived, the collective sigh from the audience was audible. Cho’s silence was arguably more powerful than crescendos.

It was hard to miss Cho’s authoritative command in every situation. The heavy heart in the opening movement of the Chopin Sonata was differentiated from the flighty Scherzo, while the well-grounded Largo movement was a prelude to the anguished then triumphant Finale. Different moments with different emotions were balanced to maximize the poignancy. Cho navigated through vastly different characters and emotions with authority.

Cho left out gratuitous theatrical gestures and showmanship. Throughout the recital, Cho was efficient, with a stoic facial expression, focused on the task at hand. That somber physical demeanor did not deprive him of exuberance or bravura, though. The second encore piece, Chopin’s “Revolutionary” Etude, Op.10, No.12, was executed with a reckless devil-may-care  abandon. The extreme velocity and seemingly careless approach was unlike the rest of the recital, but it was the only exhibition of excess in the afternoon. As a conclusion to such a meticulously constructed concert, why not have a little fun and ride on the adrenalin?