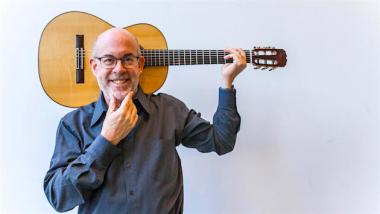 The serenade is a musical genre that began as a song performed at night by a male suitor accompanied by a guitar, outside the window of his lady love. On Monday, at the San Francisco Conservatory of Music, the Left Coast Chamber Ensemble presented a lovely and engaging program of three serenade-inspired works of the last century written by Arnold Schoenberg, Sándor Jemnitz, and Nicolas Lell Benavides.

Schoenberg’s Serenade, Op. 24 (1921–1923), is a knowing and affectionate reflection of classic tradition with its use of guitar and mandolin, its incorporation of a love song in the central movement, and its use of winds (traditional outdoor instruments). Scored for guitar, mandolin, clarinet, bass clarinet, violin, viola, cello, and baritone it allowed Left Coast to bring out a rich variety of tone color that brought to mind both Schoenberg’s Pierrot lunaire and John Adams's Gnarly Buttons.

The Serenade is also a forward looking and influential work. The six instrumental movements use common serialist techniques (of the 1950s and 60s), albeit with a high degree of freedom, and the central vocal movement is one of Schoenberg’s first pieces entirely based on a 12-note row. The neoclassical forms — including march, minuet, variations, and dance — were all delineated with absolute clarity and nuance by the ensemble and conductor Matilda Hofman. In the central Sonett, the ensemble was joined by baritone Josh Quinn who brought an ardent lyricism to Petrarch’s description of the pains of unrequited love, while the instruments captured our attention, on words like “roars” and “weeps,” with vivid tone painting.

Sándor Jemnitz, wrote his Trio, Op. 33 for violin, viola, and guitar in 1932 influenced by Schoenberg’s Serenade. At about one-third the length of Schoenberg’s work, Jemnitz’s Trio could be considered a miniature serenade. Its instrumentation is reduced to the essence of guitar and contrasting bowed instruments and the three movements can be heard as a reduction of Schoenberg’s more spacious seven-movement work. Jemnitz also features a lyrical and impassioned central movement and his outer movements, Allegretto and Molto vivo, have a dance-like energy. Violinist Anna Presler, violist Phyllis Kamrin, and guitarist Michael Goldberg played with sparkling rhythms, ardent lyricism, and beautiful tone.

The evening also featured the world premiere of Nicolas Lell Benavides’s Rinconcito for guitar, violin, viola, and cello. The title comes from the song “Rinconcito En El Cielo” (A Little Piece of Heaven) by the Mexican composer, singer, and accordion virtuoso Ramón Ayala. Benavides did not quote the musical material of the song, instead using the title to evoke his own childhood memories and also to serve as a stimulus to explore his own Mexican roots for the first time in his music. The result was an evocative serenade that created a particularly striking use of the guitar and string trio combination.

The guitar provided a subtle thread that helped hold the entire program together. While the classical instrument is most associated with solo repertoire from Spain, it also has deep roots in Viennese culture. Mauro Giuliani and Anton Diabelli, friends and colleagues of Beethoven, both wrote chamber serenades featuring guitar in the 1820s while Schoenberg’s Serenade, written a century later, was an inspiration for new music ensembles such as Alarm Will Sound, Bang on a Can, Ensemble InterContemporain, International Contemporary Ensemble, as well as the Left Coast Ensemble, which all include the guitar. Michael Goldberg has excelled as the Left Coast Ensemble guitarist for decades in roles both bravura and supportive and did typically outstanding work on this concert.

The Bay Area harbors a number of excellent composers who regularly fly under the radar. One of these is Kurt Rohde, a Rome-prize winner of a few years back. The Left Coast Ensemble regularly premieres his work and this week they’re taking on another of his pieces,...maestoso ...misterioso on a concert titled Delicacies for Diverse Ensembles.