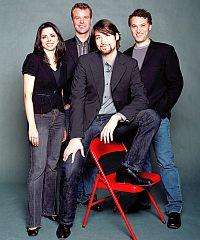 David Bratman on August 3, 2009
A cycle of the Mendelssohn string quartets: It sounds like a reasonable programming idea, yet it isn’t done very often. Felix Mendelssohn wrote seven full quartets, plus a small assortment of individual movements, just about the right amount of music for a set of three concerts. With the bicentenary of the composer’s birth as the theme for this year’s [email protected] season, the Pacifica Quartet — which has made a specialty of these works — has come to give those in three concerts. Friday’s at St. Mark’s Church in Palo Alto was the second.

Mendelssohn was in his late 20s when he wrote the three quartets that make up his Op. 44. By force of chronology — his early start and his early death — they form his middle-period works in that genre. We tend to associate Mendelssohn with his lighter or more colorful works, though his quartets are all big, serious compositions, and they get more so as they go along. (Wait until we get to Op. 80.) The composer’s skillful craftsmanship is evident throughout the quartets, and here he puts it to more serious ends. The counterpoint that he feared might seem dry and academic in the Hebrides Overture seems fluid and natural here. So, if the image of Mendelssohn in your mind is of a pops composer, it’ll take some adjusting to appreciate his quartets, though that isn’t too hard an adjustment to make, and it’s rewarding when you do.

The Op. 44 quartets may be a little too much alike to make an ideally satisfying program, but in the experienced hands of the Pacifica players they revealed their subtle differences. No. 1 in D Major is the brightest and most energetic. No. 2 in E Minor is darker and more churning. No. 3 in E-flat Major is in between, hearty but gruff.

The Pacifica Quartet is an introspective ensemble, anything but flamboyant. That doesn’t prevent it from giving fervent performances, nor from also being real speed demons, especially in the opening movements — made even more fleeting by the omission of any repeats of the expositions. There was no superficial skating over the surface of the music, however. These players come to grips with the score and understand it with the depths of experience. This showed in the distinct character brought to the contrasting slow theme of each opening movement. No. 1’s was reverent, like a chorale. No. 2’s was coy and flirtatious. And No. 3’s was creepy and mysterious.

Although the composer considered No. 1 to be the potential breakout hit in the set, it lacks one popular feature that the other two both have: a fleeting Mendelssohn scherzo. Here the fast playing shone to real advantage, giving these scherzos that distinctive lightness that other performers don’t always bring. It was all the more startling, then, near the end of the scherzo of No. 2, when the music suddenly shifts into a calmer vein. The smoothness with which the Pacifica Quartet brought off this abrupt change was the most marvelous moment of the evening.

As in all the best quartets, these players are distinct individuals. I was lucky to have heard them play twice before during this festival and get a sense of their qualities. First violinist Simin Ganatra has a strikingly dark, heavy sound, common among a certain breed of concerto soloists but rare in quartet leaders. The similarity of No. 2’s opening theme to that of Mendelssohn’s famous violin concerto in the same key came out quite clearly in her energetic, dedicated performance.

Sibbi Bernhardsson, the second violinist, is a more restrained performer, with a cultivated style and a lighter, drier tone that allows good contrasts with Ganatra’s. Violist Masumi Per Rostad buries himself in the mix and only emerges for his solo passages, which come out in a light, smooth tone more typical of violinists than of other violists.

Cellist Brandon Vamos is the problematic member of the group. For some reason, he keeps sonically apart from his colleagues. There’s nothing wrong with their ensemble playing, but even in the fullest chords, the cello line stands on its own. This played out to superb advantage in the Andante movement of No. 1, where his clearly audible pizzicato line was exquisitely beautiful. Yet in No. 2 he often seemed to be straining in the high register, with detrimental effects on the whole. In No. 3 he found a more lyrical balance, and all was well again.

A few years ago, the Pacifica Quartet recorded the complete Mendelssohn cycle for Cedille Records. It’s an excellent set, but I’m happier still to have heard these concerts. The quartet members said in a Menlo “café conversation” a couple of weeks ago that their interpretation has matured since then, and it certainly has. This was a richer, more thoughtful, and more nuanced performance, especially in its expression of varying moods — just the type of insight that Op. 44 needs most.

The cycle concludes with the passionately anguished Op. 80, and the assorted individual movements collected as Op. 81, this Friday, Aug. 7.