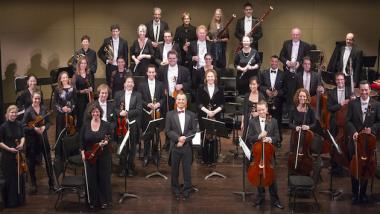 The San Francisco Chamber Orchestra presented the last of its season-opening set at Saint John’s Presbyterian Church in Berkeley on Sunday afternoon. Titled “Strings Attached,” the orchestra performed an all-strings program of diverse, energetic works that were as approachable as they were entertaining. And because it was SFCO, tickets were free, making the high-level music available to anyone.

The opener was three of the six movements of Peter Warlock’s Capriol Suite. Written in 1926, the piece comprises various Renaissance dances. Short and sweet, the movements perfectly suited the Sunday afternoon setting, with light shining through the stained-glass windows in the beautiful, wooden-walled church. Acoustically rich, the sanctuary (and its audience members) warmly received the musicians’ resonant tones.

The Basse-Dance led off with gallant dance melodies. The second movement, Pavane, was more serious in mood and emotionally stirring; perhaps due in part to its church surroundings, the orchestra seemed to resemble a choir in this movement and was spiritually transporting. Mattachins, the final movement in the complete work, is a “sword dance,” jovial and playful, and elicited grins from the audience.

Music Director Benjamin Simon addressed the audience with charisma, humor, and generous warmth, setting the stage for an interactive and intimate concert. He reflected on his experience studying the next piece on the program, J.S. Bach’s Violin Concerto in E Minor, which featured concertmaster Robin Sharp as the soloist. “Between the fires, floods, and the front page of The New York Times, this work has been my flotation device,” said Simon.

Sharp sparkled in the concerto, featuring the string orchestra as well as harpsichord. In the first movement, she managed to capture the sweet, dancing spirit of the piece while exuding tender sensitivity. In the darker second movement, her melodies were hauntingly beautiful and pure. Sharp easily executed the concerto’s technical demands, appearing poised and serene. For this particular piece, the generously resonant acoustics of the hall were a bit more hindering than helpful; at times, the orchestra was close to overpowering the soloist when she was in the lower register of the instrument. Nevertheless, Sharp and the orchestra captured a spirit which was both fun and emotionally effective.

As an encore, Sharp performed Maria Theresia von Paradis’s Sicilienne with orchestra. Audiences are used to “go-to” string encores such as solo Bach or a flashy showpiece. The Sicilienne (titled after the rhythm of its theme; a dotted or “skipping” rhythmic dance pattern), however, was beautiful and reflective with a moderately slow tempo. It was a refreshing treat.

Simon then took the audience through a musical mapped-out journey of Béla Bartók’s Divertimento for String Orchestra. Calling it one of “his most accessible works,” Simon noted that a divertimento is intended to “amuse rather than impress.” Before playing the piece, Simon used each section of the orchestra to demonstrate the use of the spunky folk melodies, unusual rhythms, irregular accents, an eerie waltz, and innovative techniques such as the “Bartok pizzicato” (in which the string is snapped in a percussive manner). Simon enlightened the audience about Bartok’s use of concerto grosso form, in which the principal players act as a small group of soloists against the full orchestra, stemming from the Baroque era and reused in the neoclassical style of the 20th century.

Thus educated, the audience waited in rapt attention and they were not disappointed. The soloists — Robin Sharp and Antoine van Dongen on violins, Alexandra Leem on viola, and Hannah Addario-Berry on cello — delighted. “As if she didn’t have enough to do after the Bach,” as Simon said, Robin Sharp beautifully executed the cadenza in the final movement. The Bartok was a spirited, spunky, and wonderfully creepy ride for all, and as Simon stated, “perfect for Halloween.”

Music for percussion and tango is paired with Handel and Respighi in S.F. Chamber Orchestra’s latest free program, with lots of chatter.