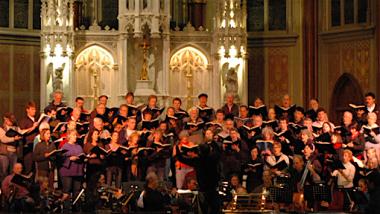 As with St. Paul, an irreligious beginning may be an unreliable indicator of what is to come. In fact, a short, confusing prelude to an extended and steady worshipful posture describes many religious journeys and their depictions. Such was the arc of the program last night at St. Ignatius, which began with a very short — and contextually misguided — set from the Fog City Singers, followed by an excellent, though eccentric, performance of Rachmaninoff’s All Night Vigil from the San Francisco Choral Society under Robert Geary.

The Fog City Singers were initially on shaky footing, surprising the audience by emerging from the back of the church and settling in to their first piece, a hymn, as they proceeded down the center aisle. The logistics of this unfortunately meant that, from my aisle seat, the first tones of the evening were the amplified and at-hand individual parts of singers, several of which were noticeably behind or ahead a beat.

Once Chris Lewis, co-founder and music director of the Fog City Singers, detached himself from his ensemble and took the helm as conductor, the timing problems receded from view. And yet, despite the inclusion of one other religious arrangement — a lamentation by American choral societies’ mainstay William Billings, the highlight of their program — the opening set struggled and itched in the grandeur of the church. This was especially the case with their final piece, chosen for its reference to another cathedral, Notre Dame. Lewis accurately prefaced this number by calling it “almost barber-shoppy” and while the audience appreciated it, it made a very Disney primer to Rachmaninoff’s testament to praise and peace from the early days of a world war.

It was perfectly appropriate, then, that the All Night Vigil began with a call to worship from the deacon, sung with wonderful, breathless exasperation by bass Nikolai Massenkoff. Throughout the piece, Massenkoff performed the role of the deacon rather than strictly singing the notes, tearing into his incantations before fully reaching his platform and retiring from it with the air of the priest who hopes someone has been listening. He rendered much of his part considerably faster, and much more ferociously, than is typical.

Almost the same can be said for the performance of the Vigil as a whole, which was an expansive and dramatic take on a piece which lends itself to contemplative delicacy. Geary shaped a number of climaxes with very sharp and rapid articulation, a move that gave the call-and-response sections an excellent turbulence. He also had no shortage of firepower on which to draw, with not only Massenkoff but all the soloists (mezzo Edith Dowd and tenor Karl Kaminsky) delivering their parts with verve and command. If a standout had to be chosen, I’d have to go for tenor Karl Kaminsky, whose gorgeous and forceful performance was, again, uncharacteristically operatic for the work.

The S.F. Choral Society and the members of the Fog City Singers who joined them for the Rachmaninoff must be shorted no praise, either. The basses descended the famously treacherous passage ending on the lowest B-flat confidently, and at a far from forgiving tempo to boot. As the Vigil continued, the performance had a dual effect: The star quality solos and dynamic interpretation insisted on center stage, while the ancient modes and simple, humble text in Old Church Slavonic, always streaming underneath the surface, developed a background that tended to draw one’s eye over the heads of the performers, to the carved dove and the crucifix. No doubt Rachmaninoff would call that a job well done.

Together with great soloists, the California Chamber Symphony, and an excellent children’s choir, the Society creates a memorable Elijah.

The Bay Area Russian choral ensemble more than doubles in size for weekend performances of the timeless masterpiece.

Two Choirs, At One, All-Night