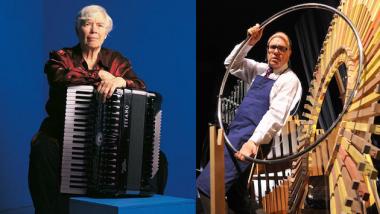 Populism, spectralism, dissonant counterpoint, and game pieces — that’s a little bit of what happened at the San Francisco Contemporary Music Players’ 4-Concert Weekend, and I was at only half of the concerts. Steven Schick, who is stepping down as director, and the late, experimental composer Pauline Oliveros were the weekend’s honorees. They seemed to inspire an endless supply of creativity in Friday’s programs.

Inspired orchestration makes Luciano Berio’s Folk Songs great. Many song cycles are scored for voice and piano, and somewhat fewer are with quartet, but Berio uses a full septet of instruments, all of which have near-equivalents in various musical cultures. Indeed, these folk songs aren’t about a particular locale (the songs are in different languages); the point is a lack of artifice that makes the music feel universal — folkish, for better or worse.

And it did. Meena Bhasin’s opening viola solo, light and quick, sounded tossed off; later, Tod Brody’s flute solos were enchanting in the same way. And mezzo-soprano Silvie Jensen pulled it all together, with a naturalness that eclipsed the mouthfuls of text. For a moment, we were all at a local gathering, hearing the especially pretty voice of some neighbor for the first time.

Galina Ustvolskaya’s Grand Duet for cello (Stephen Harrison) and piano (Kate Campbell) was the most emotionally profound music on the program, though certainly not sentimental. The Russian composer, who died in 2006, studied with Shostakovich: Glimpses of him are especially prominent in the first movement, with its unrelenting pulse and unsoftened dissonances. Resounding clarity among the voices, though, also recalls Americans like Ruth Crawford Seeger, Carl Ruggles, and the young Henry Cowell.

Even the sparser movements are forceful. Harrison’s trills were hard-edged, and the repeated down-bows, with retakes delayed to the very end, stolid. Real lyricism comes only in the fifth and final movement. Here, the cello’s playing in the Theremin-like highest register recalls Messiaen; meter seems to suspend as time expands. Yet the singing is never entirely alone: the hammering comes back and ultimately has the last, impassive word.

Timbres swim again in a new SFCMP-commissioned work by Carolyn Chen, another graduate of UCSD (where Schick teaches). Cold mountains, one belt, heartbreak green seeps into existence; from there, gentle chord progressions repeat, with infinite variety in the way the sounds — a smattering of tam-tam (gong), quietly sustained tones, and resonant plucks of the harp — combine. It’s a kind of coral reef of C major (really, it could be the soundtrack for some wondrous ocean scene): the piece glints with different qualities of light, yet everything belongs to a system that’s essentially in stasis. Late attempts to introduce change feel tacked-on.

These works were there to complement Oliveros’ text score The Witness, which unfolds in several stages. The first, in which the players play for themselves without regard for others, feels necessary but boring. Often, something about Oliveros' openings seems to fence in the players: They’re instructed to make a sound, any sound at all, but it’s as if people are afraid of being rude, too loud or too often, and everything comes out sounding kind of quiet and contemplative. The later collaborative stages, in which sound ideas transmute through different personalities and props, are more interesting.

Earlier in the program, in fact, we’d heard another interpretation of the same score — but for bass (Worn) alone. Oliveros, to be sure, sanctioned this version for solo with “imaginary partner,” but let’s be real: it’s Worn messing around. Not so poetic, then, yet the more he played (multiphonics, percussion, all without caution or restriction) the more I enjoyed myself. Maybe it’s the collaboration, after all, that’s a drag?

Worn’s theatricality was also at the helm in Playbook, a series of improvised game pieces by San Francisco-based composer Danny Clay (the last of the three featured composers under 30). In the best movement, Worn leads the band as a mime, gesturing with his bow but never actually making contact with the string. Instead, it’s the other musicians, standing at the back of the house, who vocalize the music he could be making.

It’s at times hilariously accurate — Worn’s impassioned, over-the-top grimaces creating heartsick warbles — and then hilariously awkward, when someone’s response, just a little too delayed, sticks out of the fray. Worn plays the capricious soloist well in this musical Simon Says, where the stakes are always high.

The sense of expectancy here — the same kind of predictability you feel with old music, in fact — feels refreshing. The Oliveros score may be tightly organized in theory, yet in performance, it’s not always traceable for those of us on the listening end. In Playbook, though, you always know when the sounds are going to come, and how they could or should sound. But you never know quite how it’s going to go down, and that’s the fun of it.