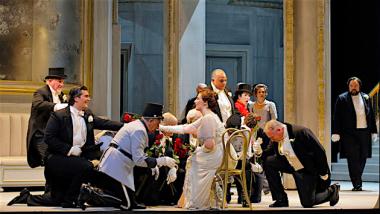 There are moments in Arabella when it’s easy to forget which Strauss composed it — Johann or Richard. The slightly sappy love story is pure operetta, and waltzes and polkas pour from the orchestra pit as freely as the Moët & Chandon in the Fledermaus-style ball scene. While it’s possible to enjoy the work as a lighthearted homage to Vienna’s Golden Age, Hugo von Hofmannsthal’s libretto also transcends the Jeanette MacDonald schmaltz to engage with questions of female agency and even gender identity.

These timely topics offer an obvious starting point for a director seeking to bring depth to the ostensibly simple Cinderella tale. Yet San Francisco Opera’s new production of Arabella, which opened Tuesday, rarely taps into the social commentary latent in Hofmannsthal’s text and the psychological complexity implied in (Richard) Strauss’s 1933 score.

Director Tim Albery, who previously staged this production at Santa Fe Opera, Minnesota Opera, and the Canadian Opera Company, has updated the action to the 1910s — Arabella trades her hoop skirt for a slimming Gibson Girl get-up. It’s a period that saw the emergence of the New Woman and a push for equal rights in European society. In 1911, the year of the first International Women’s Day, suffragettes rallied for the vote on Vienna’s iconic Ringstrasse. It’s easy to imagine a character like Arabella in this context; even if her goal is marriage, she pursues domestic bliss on her own terms.

But from Ellie Dehn’s performance, we never got a sense of Arabella as the kind of independent Viennese woman exemplified in fin-de-siècle figures like Alma Mahler. The soprano, who played an excellent Manon last season, is too sweet-voiced in this role and comes across more as a blushing ingénue than the sophisticated flirt suggested by Hofmannsthal’s dialogue. Her character’s playful let-down of the three suitors, for instance, was delivered without a trace of irony and sounded genuinely apologetic. She also veered slightly into starry-eyed, Rodgers-and-Hammerstein territory during her introspective solo passages, especially the sentimental “Mr. Right” (Der Richtige) number. In the final aria, however, Dehn beautifully conveyed Arabella’s newfound emotional strength with her thoughtful pacing and careful diction. Her swelling top notes had a compassionate, embracing quality that expressed the same unspoken forgiveness as the glass of water Arabella gives Mandryka.

The other potentially interesting character study is Arabella’s sister Zdenka, who, because of her family’s financial troubles, must live as a more-affordable son. It’s hard not to interpret her situation as a (likely unintended) metaphor for transgenderism. But, again, Albery missed the opportunity to foreground this unexpectedly relevant connection. At the moment that Zdenka’s hidden gender was revealed in the final scene, Arabella instantly wrapped her negligee-clad sister in a fur coat. It’s a historically accurate response to immodesty, of course, but one that undermines the sense of liberation in this act of “transition” from male to female.

As Zdenka, Heidi Stober possesses a bright, bell-tone soprano and outshined Dehn in their Act I scenes — I look forward to hearing her Angelica in Orlando this summer. My one reservation about her fine performance was that she was too convincingly boyish and gave little indication that her character was uncomfortable dressing en travesti, as Strauss’s fidgety leitmotiv suggests. It led to some inadvertent sexual tension in Zdenka’s duet with her sister; without the supertitles, you’d have guessed she was a bashful young man attempting to woo Arabella.

Mind you, I don’t mind a conservative staging if I can get lost in the guilty-pleasure rom-com elements. But there’s little chemistry between Dehn and Brian Mulligan as Mandryka. I suspect they didn’t have enough rehearsal time together — their voices didn’t blend well in the Act II love duet, which came off more like a breakup. Mulligan is a technically oriented singer and I admire his commitment to musical accuracy. But there was a certain stiffness to his performance, both in his unexpressive phrasing and rather awkward physical movements. He did, however, take obvious pleasure in powerful climaxes, and in his final monologue he managed to capture a bittersweet mix of remorse and hope.

The secondary romantic plot involving Zdenka’s self-sacrificing love was puzzling as well, mostly due to Daniel Johnson’s menacing portrayal of Matteo. The tenor’s strained outbursts in his upper-register were off-puttingly harsh, and his crazed stumbling about the stage didn’t line up with Arabella’s description of him as “wide-eyed, like a child.”

As Countess Waldner, mezzo Michaela Martens avoided the overbearing-mother stereotype and was delightfully coquettish in her prowl for younger men at the ball. Her husband the Count was played by baritone Richard Paul Fink, whose comically cantankerous delivery was well suited to the sleazy gambling addict. Hye Jung Lee as the Fiakermilli was the only soloist who exuded any charm. She resembled a dominatrix in her riding boots and bustier, snapping her coachman’s whip as she effortlessly spun out sparkling champagne-bubble coloratura. Tobias Hoheisel’s grey sets resembled a mausoleum, but his costumes — including plenty of luxurious furs — were elegant and understated, with just the right amount of embroidered bling on the gowns.

The potent singing combination of Carmen Giannattasio and Brian Jagde distinguish this production.

The venerable institution is vital and current, as a week of performances demonstrates.

Julie Adams is terrific as Mimi, and a relaxed, modern setting sets the stage for great singing and playing throughout.