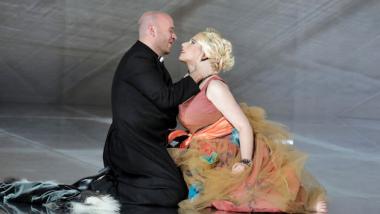 Opera attendance is a constant quest for perfection. Performances where the staging, singing, and orchestra are all of the highest quality are few and far between — but when found, they’re magical experiences that renew my love of the art form. Massenet’s Manon at San Francisco Opera has that magic, largely thanks to Patrick Fournillier’s conducting, Vincent Boussard’s direction, and Michael Fabiano’s singing.

Boussard’s production is in the best Regietheater tradition. A curved white wall serves as a minimalist background, enlivened at various points by colorful bunches of balloons, cutouts of the Parisian skyline, and a giant chandelier. The lighting (designed by Gary Marder) plays a huge role in the staging’s success, from the colorful washes of the first act, through the bare bulb and oversized shadows of the second, to the overwhelming darkness of Manon’s death scene. The costumes defy categorization, spanning three centuries and incorporating wigs, ruffles, sparkles, and even a bird! The word that comes to mind when describing the production’s overall aesthetic is “trashy” — but appropriately so. A little cheap glitz belongs in an opera about the lure (and snare) of money.

The plain set keeps the focus on the singers, who have clearly been directed with great attention to detail. Both while singing and silent, they move, gesture, and emote with crispness and variety. Many bits of action are charming — such as when Manon sits on Des Grieux’s desk before innocently asking “Am I bothering you?” and in an adorable coup de théâtre during Manon’s show-off aria in act III. (I won’t spoil it by revealing the details here.) One false step stands out: Des Grieux rips open his priestly garb, Superman-style, in the St. Sulpice scene to reveal his bare chest. On opening night, this business had the audience in stitches at what ought to be a touching moment, so I predict it will be cut for later performances.

The cast showed plenty of vocal as well as dramatic talent. As Manon, Ellie Dehn sang with effervescent sound and a free top. She laughed and flounced well but also found moments of great feeling, such as her shimmering, legato “Adieu, notre petite table” (Goodbye, our little table). Still, it was Michael Fabiano who stole the show as Des Grieux. His velvety, pastoral dream aria in the second act melted my heart (how could Manon stand to betray him after that?). He chewed up the scenery at St. Sulpice, playing his soliloquy as a sort of mad scene — alternating between booming and whispering, and collapsing completely in the end. Singers of the smaller roles (of which Manon has a lot) earned their applause as well, including David Pershall’s crackly Lescaut, Timothy Mix’s rumbling De Brétigny, and James Creswell’s commanding Comte des Grieux. The trio of courtesans (Laura Krumm, Renée Rapier, and Monica Dewey) also impressed with quick, tightly harmonized singing.

The San Francisco Opera chorus, directed by Ian Robertson, was in fine vocal form, especially during the chaotic tumult of the fourth act. This production also marked the best physical direction of the chorus I’ve seen on the War Memorial stage, with crowd scenes meticulously choreographed. Conductor Patrick Fournillier led the orchestra in a vigorous rendition. Manon ranges from brisk, festive jangling to the crunchy dissonances and flowing streams of tragedy, and the orchestra played both extremes with vivid color. This sort of French Romantic repertoire is not San Francisco Opera’s usual fare (at least, not in recent years), but you’d never have guessed that from the force and confidence of their performance.

Ultimately, San Francisco Opera was constrained by the flaws in Massenet’s score. Energetic overtures, soaring arias, and lush textures sometimes give way to muddled ensembles. Manon has a strange start (five minor characters complaining of hunger) and a sudden ending (unlike in the novel or Puccini’s adaptation, Manon doesn’t even get deported before dying). It’s hard not to read the outcome as misogynistic, with Manon’s illness and death serving as a sort of divine retribution for her sin of gold-digging. Boussard’s staging, while thoroughly engaging, does nothing to counter that interpretation. If you can put that qualm aside and revel in glorious singing and acting, this Manon is a definite success.

The much-loved, much-seen show, with its opulent designs, opens the season with a lukewarm cast.