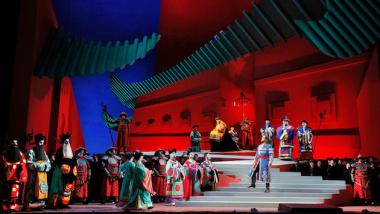 Opening an opera season with Turandot, Puccini’s grandest of operas, is not an easy romp through the streets of Peking. The virtually luminescent colors and fantastic chinoiserie of David Hockney’s 25-year-old, newly refurbished and repainted set only whet the appetite for musicianship of the same order.

To avoid being dwarfed by visual splendor — Ian Falconer’s robes and headdresses are so glorious that the outfits of many of the opening night glitterati seemed upstaged — the company pulled out all the stops. The cast on Friday’s opening night let out consistently big and bold sound, but the first act was curiously tepid, and the two subsequent acts only intermittently caught fire.

Each principal had their own coping mechanisms. Tenor Brian Jagde, in his role debut as the love-smitten Prince Calaf, had no problem standing arrogantly while summoning forth volumes of sound. While his voice rang out, growing in power as the opera progressed, and admirable highs poured forth without hesitation, Jagde’s first act was characterized by disconcerting, old-school Italianate over-emphasis on leading consonants.

Instead of the smoothness of line we have come to expect from the likes of Pavarotti, Domingo, and Björling before them, Jagde’s delivery was far more jagged. While his Prince was hardly bullish, neither was he elegant. Jagde’s third act “Nessun dorma” began disappointingly, with a low range that lacked beauty, and concluded with a high punch that set audience members cheering. It was a victory, of sorts.

It also elicited the only real cheering of the evening. Soprano Martina Serafin equaled Jagde in the decibel department, and looked the part of a beautiful ice princess in need of a deep thaw, but her highest notes sounded like perfectly controlled screams. They weren’t repellant, by any means, but neither did they provide adequate reason for myriad suitors to sacrifice their heads in hope for her love.

In the opera’s final act, in the conclusion provided by Franco Alfano after Puccini died, Turandot magically melts at Calaf’s kiss. Serafin and Jagde both attempted to bring warmth into their voices, but it was not enough. That lack, combined with Serafin’s many “stop” motions expressed by hands in silent film star pose, made me long for the storied Turandots from San Francisco Opera past, who have included Eva Marton, Montserrat Caballé, Birgit Nilsson, and Leonie Rysanek.

The warmth missing in the romantic leads was supplied mainly by bass Raymond Aceto as blind King Timur. Repeating his assumption from 2011, Timur’s grief over the death of his servant, the slave Liù, provided the only real heart of the evening. It was a moving portrayal, magnificently sung, that briefly inspired others to sing from a deeper place.

Soprano Toni Marie Palmertree’s Liù shone each time she had opportunity to pour forth Italianate passion. Less successful were her more effortful than floated soft highs, and her acting, which was costume-bound. Given that Palmertree has difficulty rising from a kneeling position, director Garnett Bruce failed by not providing a graceful alternative. Regardless, Palmertree’s dramatic outpourings give promise of a successful career in appropriate repertoire.

The mismatched trio of Ping, Pang, and Pong could not provide adequate sardonic and nostalgic relief from the decibel onslaught. Joo Won Kang’s mellifluous baritone is quite beautiful at the top of the range, but lacks power lower down. Lacking the bright leading edge of tenors Julius Ahn and Joel Sorensen, his voice failed to blend. Given that only one of the three men could move athletically, and with grace, Bruce’s do-the-best-you-can direction was not a formula for success.

Music Director Nicola Luisotti had no difficulty summoning forth glorious sounds from the orchestra. The percussion section (John Burgardt, Richard Kvistad, and Patty Niemi) was especially splendid. Luisotti gave his singers all the space they needed to swell and bend phrases. The grand San Francisco Opera Chorus, directed by Ian Robertson, somehow managed to sing gloriously in the limited space allotted to them while struggling to fulfill the exaggerated demands of Garnett Bruce’s sometimes silly, silent-filmish choreography

The man who continues to fulfill Gockley’s “fondest wishes” as music director, said (in the best paraphrase I could scribble down) “In a world full of stupid things, we need this music that fills our souls. ... When I came here, my hair was black. Now it is gray. Maybe it is the fog. This is such a fantastic, open-minded city. It has completely changed my life. Things in the future will be better, don’t worry.”

May the future include many more triumphs from Luisotti.

The San Francisco Opera company’s musical director elected to move on after his contract expires two years from now.