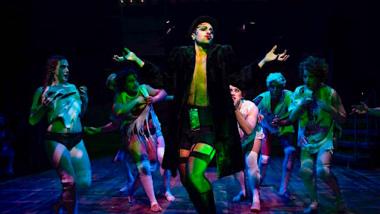 Neither a resistance hero nor a collaborator, Fräulein Schneider is “just an average person” as she faces the emerging Nazi rule in Berlin around 1930, being told she cannot marry a similarly aged man because he is Jewish.

Unlike “June-moon” songs in typical musicals (or even the partially woke South Pacific), she admits her utter helplessness that is the lot of most people living under repressive regimes:

That’s just one example of the many ways Cabaret belongs in the domain of Stephen Sondheim’s “opera/musical” hybrids — complex, substantial, and often dark works.

The excellent SF Playhouse production, which opened last week for a long run, opted for the 1998 Sam Mendes revival among the work’s many versions. With music by John Kander and lyrics by Fred Ebb, the original Broadway production opened in 1966 (for a run of 1,165 performances), with book by Joe Masteroff, based on the play by John Van Druten and stories by Christopher Isherwood.

In Susi Damilano’s direction, SF Playhouse fully realizes and reveals those difficult and scary values. Cabaret traces the free, dizzying, raunchy days of the Weimar Republic (1919–1933), followed by the country’s descent into the terror of the Third Reich (1933–1945), which began as early as 1929–1930 — the time of the musical.

The action on Jacquelyn Scott’s properly minimal set, with Nicole Helfer’s frantic choreography  and the whole cast in manic, often “graphic” motion, works well. But what sets apart the SF Playhouse production is its musical excellence. The superb cast of singers received humongous support from a six-piece band under the direction of Dave Dobrusky, but there was also something seldom — if ever — recognized in reviews

After decades of crusading against amplification — especially in small theaters with the volume jacked up to high heaven — I finally experienced a sound design (by Anton Hedman and Teddy Hulsker, under the benevolent thumb of Damilano and restrained by whoever was running the board at the Saturday matinee) that provided a natural sound while making even the quietest passages eminently audible.

It was here that the audience enjoyed subtle musical moments, as Cate Hayman’s superb Sally Bowles and Jennie Brick’s affecting Fräulein Schneider virtually whispered to great effect, respectively, “Maybe This Time,” “So What?”/“What Would You Do?” Hayman, of course, had plenty of opportunity to belt it out in Sally Bowles’s big numbers before and after being in a reflective mood.

Atticus Shaindlin, a young actor with a remarkable acting resume while still working on his BFA in drama at Carnegie Mellon University, impressed in the fiendishly difficult role of Clifford Bradshaw, the Americanized alter ego of Isherwood. While the whole play revolves around him, the character is neither a hero nor an antihero, and he mostly just responds to people and situations rather than initiating action.

If the challenge for that role is to remain only modestly interesting, the opposite is true for Ernst Ludwig, a big role that dominates others in the story. While Shaindlin managed to balance inaction with remaining front and center, Will Springhorn Jr. turned in a winning performance without overdoing it as mover-and-shaker.

Springhorn and Abby Haug (Fräulein Kost) helped lead the rousing and fearsome Act I finale, “Tomorrow Belongs to Me,” which serves as a Nazi anthem in the musical and elsewhere, although that infamy is questionable.

The beauty of Cabaret is that it works on so many levels — from mere spectacle to something laden with meaning — and the SF Playhouse production satisfies on each level.

Life Is Cabaret for These Young Chums

The steamy Broadway revival will transform the Golden Gate Theater into a decadent Weimar nightclub.