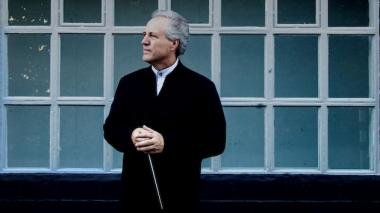 It’s a tricky thing to keep an engine like the San Francisco Symphony tuned up. As Chicago Symphony Music Director Riccardo Muti observed to the Chicago Tribune’s Howard Reich a few months ago, “to be the pilot of a Lamborghini or a Ferrari is much, much, much more difficult than to be a pilot of a simple Fiat.”

That’s why, in the months that SF Symphony Music Director Michael Tilson Thomas is away, the orchestra plays with only a small list of guest conductors who are trusted to keep the music-making lively and interesting (to the musicians) while also guarding against the creeping intrusion of bad habits. This month, Ton Koopman and Simone Young have taken the wheel and this past weekend, it was Manfred Honeck’s turn, in concerts featuring Mozart’s Piano Concerto No. 22 in E-flat Major, K. 482, and Anton Bruckner’s Symphony No. 4 (“Romantic”).

Honeck, the music director of the Pittsburgh Symphony, is an important resource for the SF Symphony, having substituted at short notice in a February concert set, as well as leading his scheduled dates in October 2018. He’s energetic and engaging on the podium, and the orchestra responds vigorously to him. And he hit the broad points of interest on Saturday night in interpretations that were straight down the middle.

In Mozart’s concerto, the orchestra had the pleasure of Leif Ove Andsnes as soloist. He was undemonstrative in his musicality; he just played the piece, but everything sounded natural and right. And that’s important in K. 482, which requires a lot of smooth handoffs between orchestra musicians and soloist.

This concerto doesn’t get the love of its immediate predecessors (Nos. 20 in D Minor and 21 in C Major), and I’m not exactly sure why. It certainly has great tunes in abundance. Its dominant emotion derives from the aristocratic march tune that kicks off the first movement, although Mozart provides plenty of contrast along the way. The gorgeous Andante in C minor is another high point. The SF Symphony performance was solid, but neither charming nor detailed, and much of the intricate writing for the woodwinds was run over in this energetic, broad-brush interpretation.

Honeck was on much firmer ground with his reading of Bruckner’s symphony. In this case, imparting energy and providing clear, large-scale connections is important: Bruckner is a discursive composer, and Symphony No. 4 is over an hour long. The brass is taxed heavily in this score and SF Symphony’s group, from principal Robert Ward down to fourth horn Jessica Valeri, shone. The massed strings (55 of them, divided, European style, with second violins seated to the right) held their own and provided a smooth, strong core to the sound. That’s a sound that, locally, only this orchestra has.

And yet, it would have been nice — in a symphony that the composer worried over and redid a couple of times — if we had been invited to spend time with some of the details. As in the Mozart, these tended to be sacrificed in pursuit of the big picture. Everything was pointed to the big crescendos in which the brass crown the paragraph with a fortissimo blast. But the reason that Bruckner created these large structures was to indulge his improvisatory sense and feel for orchestral color, twisty modulations, and harmonic shadings. If more of that had been communicated, then the outer movements especially would not have suffered from a nerveless repetitiveness.

When you don’t hear this orchestra regularly, you can forget what a magnificent sound they can make, and Honeck certainly had their attention. It’s precisely for that reason, however, that you might wish that either of these performances had been more special.

Manfred Honeck Concocts a Frothy Concert With the S.F. Symphony

The conductor opts for Strauss sweets.

Leif Ove Andsnes talks about bringing the little-known Sibelius piano music to audiences, and about the rigors of touring.