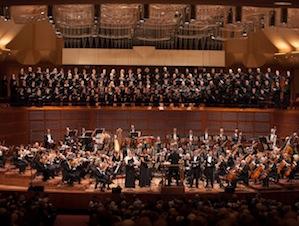 No shrinking violets they, Michael Tilson Thomas and the San Francisco Symphony crowned the orchestra's centennial season with the greatest symphonic warhorse of them all, The Ninth. There is a good many No. 9 in the literature, of course, but the one with the definite article is by Beethoven.

It is a challenge because it's so big, so well-known, so many-faceted, and each movement a unique, different masterpiece in itself. And yet, Wednesday night, those backstage considerations were not in evidence, there was no sense of suspense or effort.

What the audience heard — and rewarded with a justified standing ovation — was an assured, majestic performance by MTT and the orchestra, and something even beyond that by Ragnar Bohlin's Symphony Chorus.

Besides the power required for the "Ode to Joy," a great choral performance must also be seamlessly unified and yet with distinguishable layers of tonal beauty, and that was the case here. In addition to the accustomed excellence from the women, the men also shone this time, particularly baritones and basses (not usually singled out, but starring tonight).

Bohlin himself conducted the chorus in the evening-opening Ligeti a capella Lux aeterna, one of the composer's best-known works, thanks to 2001: A Space Odyssey, which uses four Ligeti pieces, this one as the score for the scene when the mysterious monolith is first approached by the astronauts.

A fiendishly difficult work of "voice clouds" and "sonic fog," Lux aeterna lasts nine minutes by the watch, but feels as if time stopped. That is especially true at the end: After the concluding five bars of a low-register major second sung by altos, the sound disappears and the score calls for seven bars of conducting in silence.

The audience was mesmerized watching Bohlin conduct and no sound from the chorus ... the effect is hold off applause and conclude the work the right way. (So many other works would benefit from separating music and applause.)

The other, even shorter work on the 20-minute-long first half is Schoenberg's dramatic A Survivor from Warsaw, with overamplified narration by Shuler Hensley.

For those who know two Schoenbergs — the ultraromantic composer of Gurrelieder and the 12-tone experimenter — Warsaw is novel and different. It uses the Sprechgesang (speech-song) associated with early Schoenberg (but originating, as the late Michael Steinberg pointed out, from the unlikely source of an Engelbert Humperdinck opera), and a bewildering mixture of music and sound, culminating in the choral cry of "Shema Yisroel."

But back to the Beethoven: From the very first bars of the Allegro, it was clear that conductor and orchestra own the piece. The first violins, cellos, woodwinds were at their best, and MTT's rock-steady tempos and balance kept a textbook performance going.

Power and excitement continued in the second movement, the performance settling down for the heavenly Adagio, just a bit short of the "cantabile" marking, and not quite as translucent as the music can — should — be.

The orchestra, cellos leading, was superb again in the Finale, and bass-baritone Nathan Berg's somewhat rough, but powerful call "to put aside these sounds ... and speak more joyfully" foreshadowed the chorus' bacchanalian salute to joy. Soprano Erin Wall, mezzo Kendall Gladen, and tenor William Burden were the other soloists, not making a strong impression, but blending into the aural gestalt The Ninth is all about.